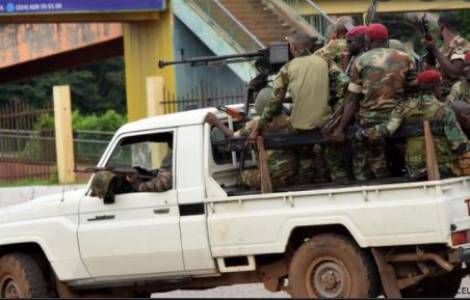 2022-02-04
The shadow of drug trafficking in the attempt to attack the top management of Bissau?

2021-12-07
In a difficult social situation, requests for baptism are growing

2021-08-20
Death of Iman Ustas Aladji Bubacar Djalo: "His commitment to dialogue will not be forgotten"

2021-06-19
After almost twenty years, the Catechetical Formation Center for families-catechists from the rural world reopens

Bissau (Agenzia Fides) - "At the moment the situation is calm, I would say that we are back to normal, if it were not only for the signs left around the place where the strange coup attempt took place. Yesterday, February 4, I passed by the presidential palace to celebrate a mass in a nearby community and I noticed that the road is closed and there are soldiers guarding it. Other than that, life continues as normal". In an interview with Agenzia Fides, Father Celso Corbioli, of the Oblate Missionaries of Mary Immaculate, spiritual director of the major Seminary of Bissau, in the country since 2003, reports that there is no clarity on the failed coup that took place in Guinea Bissau on February 1. And he adds: "We do not yet know if we can really talk about a coup or some other destabilizing act, because no one has yet fully understood what are the reasons behind the gesture and the instigators or the real intentions. At the moment, the deaths of at least 11 people have been confirmed, although there are those who speak of a higher number. Among the dead are soldiers who defended the building, members of the presidential guard and other civilians, including a minister's driver. Who are the authors is the big unanswered question, because there is no evidence that they are military: they were dressed in uniform but, apparently, they were not from the regular army; they may have received training, but they were not in the ranks of the army. Another strange element is that all of them managed to escape without problems, despite carrying heavy weapons. One wonders: how was it possible?" The hypotheses point to international drug traffickers, while, precisely because we are groping in the dark, some think of an Islamic matrix.
"There are those who think about the possibility of an Islamic track - says the missionary -, although, in reality, it seems very unlikely. Others speak of international drug cartels. But, several days after the event, the observers are unable to formulate a well-founded hypothesis, not even the opposition parties advance credible clues. What is striking is that they managed to besiege the presidential palace and showed up en masse.
Several witnesses saw and heard what was happening and report a large and well-armed group. I heard on Radio France the news that ECOWAS (Economic Community of West African States) is reconsidering sending security forces to the country. At the recent meeting of the transnational organization in Ghana, in Accra, there was talk of the situation in Guinea Bissau and the hypothesis of sending again, as in the past, a peacekeeping force".
Father Corbioli concludes: "Last Saturday was a day of celebration for the Church because the new Bishop of Bissau, His Excellency, was enthroned. Bishop José Lampra Cá, until now Auxiliary Bishop and Apostolic Administrator. The seat had remained vacant following the resignation of his predecessor. The ceremony in the cathedral was also attended by President Umaro Sissoco Embalo, of the Islamic religion, and Prime Minister Nabiam. It was a good sign. A few days later the attempted coup d'état took place, but we hope to be able to return to normal soon". (LA) (Agenzia Fides, 5/2/2022)

AFRICA/BURKINA FASO - The Bishops remind the coup leaders: "Governing is putting oneself at the service of the common good"