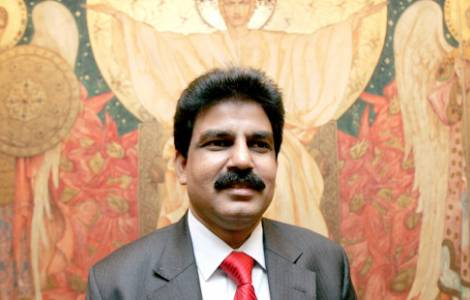 Vatican City (Agenzia Fides) - On the occasion of the anniversary of the death of Pakistani Catholic minister Shahbaz Bhatti, carried out by terrorists on March 2, 2011, we publish the afterword to the book by Paolo Affatato and Emmanuel Parvez entitled "Shahbaz Bhatti. The eagle of Pakistan" (Messaggero, Padova 2020 Edition), in which it is hoped that "the work will constitute a valid contribution to help better understand his rich personality and encourage the process for the recognition of his virtues".
* * *
"The souls of the just are in the hand of God, and no torment shall touch them. They are in peace" (Sap 3,1-3).
Shahbaz Bhatti was a righteous man. He was a man who lived in peace because he held the greatest treasure in his heart: Christ Jesus. As a lay Catholic in Pakistan, he was a man engaged in social and political life for the defense of Christians and the rights of all the oppressed. An authentic "beggar for the grace of God", one sometimes noticed him rolling his eyes before a speech in Parliament, pondering over a Rosary while traveling in his frenetic life as a public man, reciting a prayer of entrustment to God before an important meeting.
Bhatti was "present to himself" and according to St. Paul's expression, he always "summed up all things in Christ, in heaven and on earth". This was the secret of peace, serenity and gentleness that housed in his heart and that illuminated his face. This was also, in a spirit reconciled with himself, with God and with his neighbor, the root of the inner strength and benevolence that he gave to anyone he met on his path. His was a life of "mystic with his feet on the ground", an existence marked by faith and by the presence of God in the ordinariness of everyday life.
Shahbaz Bhatti appears today as an example for Christians and non-Christians in Pakistan because he was a man who lived the "shalom", that is, the fullness of a spirituality, a gift from the Most High, which characterized every moment of his life, even among difficulties, inconveniences, fears and risks. He brought with him until his death, which occurred violently with the assassination on March 2, 2011, the "ministerium pacis" which is the beginning of all wisdom.
As a mature Christian, Shahbaz Bhatti was well aware of the meaning and value of his baptized vocation and mission. That sacrament, which had grafted him into Christ like a branch in the vine, had made him a priest, ready to offer himself to the glory of God and for the salvation of humanity; it had made him king, calling him to build the Kingdom of God in history, but also to face spiritual combat to overcome, in himself, the kingdom of sin, directing it towards holiness; it had made him a prophet, capable of expressing words of truth, of denunciation and of hope, committed to witnessing the Gospel with words and deeds, ready to work hard for the respect of the dignity of all men.
Animated by this spirit, Shahbaz Bhatti gave a crucial contribution to the identity and history of Christians in the "land of the pure", proposing a model of believer who, immersed in an Islamic society, does not live in an "inferiority complex", nor in the "minority" one. Such attitudes, when taken, generate pessimism, victimization, complaints and commiseration or, at the most, fuel the proud claim of rights, with campaigns by activists, typical of civil society organizations. (...)