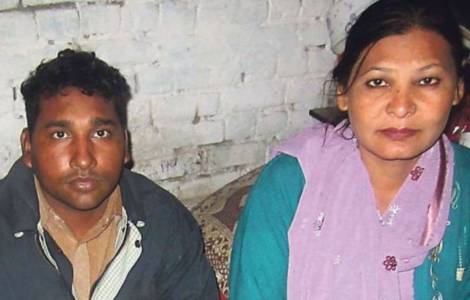 Lahore (Agenzia Fides) - The appeal verdict of Shafqat Emmanuel and Shagufta Kausar, a Christian couple from Gjra (in Punjab) sentenced to death for blasphemy in 2014, will be read on 8 April 2020 by the Lahore High Court on charges of having sent telephone text messages deemed blasphemous. This is what Catholic lawyer Khalil Tahir Sandhu, who took over the defense of the two defendants, reports to Agenzia Fides. The lawyer says he is "confident" for the positive outcome of the hearing and for an acquittal verdict, as "there is no clear evidence against the two of them. The case is clearly an artifact", he explains.
The incriminated SMS, in fact, were written in English, but both defendants, who have four children, are poor and illiterate, they cannot write in Urdu, nor in English. "The trial before the Session Court (First Instance) was conditioned by Islamist pressure", notes the lawyer. The appeal presented to the Lahore Court of Appeal is examined six years after the first instance sentence "and this delay in the justice system, which some say is accentuated for Christian victims, is in itself a very negative fact, which heightens the suffering of two innocent people", notes lawyer Sandhu who in his career has defended over 40 cases of Christians wrongly accused of blasphemy.
There are currently 25 Christians in prison for blasphemy in Pakistan, 6 of whom sentenced to death. All victims who, according to the lawyer, "are safer inside a prison rather than outside, where they would be exposed to the revenge of Islamic radicals who would like to execute those who are branded as blasphemers even before the trial that ascertains the responsibility", explains the lawyer.
Shagufta Kausar, knew Asia Bibi (the Pakistani Christian sentenced to death and acquitted in 2018) well, for having been, in the last phase of detention, her cell neighbor. The woman and her husband hope in the support of public opinion, national and international, and also in the specific support of Asia Bibi, who is now free and visiting France. (PA) (Agenzia Fides, 28/2/2020)