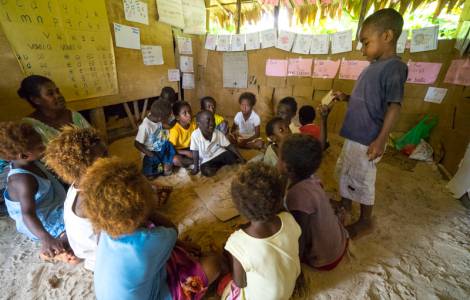 2020-01-24
Bishops and Caritas against human trafficking: a social alarm

2020-01-20
Jubilee of the beatification of Peter ToRot, an example for everyone

Bereina (Agenzia Fides) - "We pray and work so that the right to education for all children can be truly recognized, not only on paper or speeches by politicians, but also concretely achieved by the daily care of their parents and communities": this is the hope of Sister Giovanna Bordin, missionary of the "Cavanis Jesus Good Shepherd Fraternity" in Bereina, touching a very important key, which politics has also underlined recently. "The government is deeply convinced that education is the tool that will transform and support the nation's prosperity", said James Marape, Prime Minister of Papua New Guinea, in an official letter.
Until the last school year, in PNG, a policy called "Tuition Fee Free Education" (TFF) was in force, with which the state assumed full economic responsibility for school expenses. As from this year it has been announced that a new system called "Government Tuition Fee Subsidy" (GTFS) will be in force, with which the state will assume 80% of the school fees, leaving parents and families to cover the remaining 20%, with the aim of making them more responsible for the education of their children.
"The government wants to stop the welfare syndrome that has been allowed so far and has developed in Papuan culture", added Marape. "The change in financial management was decided to re-motivate parents and communities to work the land and work hard, to contribute to economic revival, renewing our nation and stopping the trend towards welfare and addiction syndrome" The Prime Minister continues writing: "By their nature Papuans are hard workers, resilient and independent. But for many years, the government has adopted and allowed policies that have made people lazy".
As Sister Bordin explains to Fides, "this new decision by the Marape government has raised criticism but, regardless of position or political sympathies, it is certainly important to recognize the strengths of one's culture and keep them alive, but also to recognize those attitudes of laziness and welfare that threatens to block the development of the nation. Any initiative and decision that can help change is important, even if criticized". "The hope in educating children can also awaken the strength and capacity for sacrifice and care of adults", concludes the missionary. (GB/AP) (Agenzia Fides, 22/1/2020)