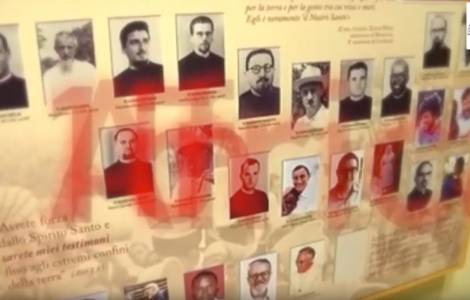 Vatican City (Agenzia Fides) – In the wake of the Extraordinary Missionary Month of October 2019 lived by Catholic communities at all latitudes, which was also an opportunity to rediscover the figures of many witnesses of the faith of the local Churches who spent their lives for the Gospel in the most diverse contexts and situations, Agenzia Fides continues its service to collect information regarding the missionaries killed during the year. We use the term "missionary" for all the baptized, aware that "in virtue of their Baptism, all the members of the People of God have become missionary disciples. All the baptized, whatever their position in the Church or their level of instruction in the faith, are agents of evangelization" (EG 120). As it has been for some time, the annual list of Fides does not look only to Missionaries ad gentes in the strict sense, but tries to record all the baptized engaged in the life of the Church who died in a violent way, not only “in hatred of the faith”. For this reason, we prefer not to use the term “martyrs”, if not in its etymological meaning of “witness”, in order not to enter into the question of the judgment that the Church might eventually deliver upon some of them, after careful consideration, for beatification or canonization.
According to information gathered by Agenzia Fides, in 2019 29 missionaries were killed throughout the world, mostly priests: 18 priests, 1 permanent deacon, 2 religious men, 2 nuns, 6 lay people. After eight consecutive years in which the highest number of missionaries killed was recorded in America, since 2018 it is Africa that has taken the first place in this tragic category. In Africa in 2019 12 priests were killed, 1 religious man, 1 religious woman, 1 lay woman (15). In America 6 priests were killed, 1 permanent deacon, 1 religious man, 4 lay people (12). In Asia, 1 lay woman was killed. In Europe, 1 nun was killed.
Another note is given by the fact that there is a sort of "globalization of violence": while in the past the missionaries killed were mostly concentrated in a nation, or in a geographical area, in 2019 the phenomenon appears more generalized and widespread. 10 missionaries from Africa, 8 from America, 1 from Asia and 1 from Europe. (S.L.) (Agenzia Fides, 30/12/2019)