AMERICA/DOMINICAN REP. - Farmers expelled from their lands, attacked and threatened: support from organizations and the Church 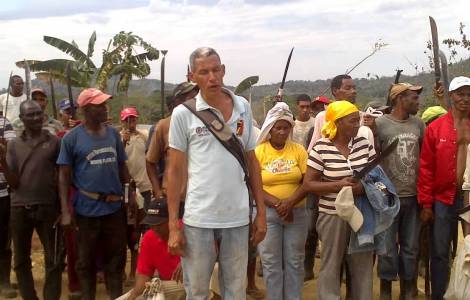 2020-02-28
The Bishops: without a deep love for the homeland it is impossible to carry out the project of the founding fathers

2020-01-16
The Bishops for the 2020 elections: "As Dominicans and as Pastors we are concerned about everything that is about the human being"

Santo Domingo (Agenzia Fides) – The farmers of El Seibo arrived in the capital more than two months ago asking for a definitive intervention by the authorities to resolve their situation. "We are talking about 240 peasant families, who were evicted and expelled on 6 September 2018 from their homes and their lands in La Culebra, Vicentillo, El Seibo, by a violent group of guards, police and civilians - reports missionary Father Miguel Ángel Gullón, OP to a Spanish newspaper, who has been working in the Dominican Republic for more than twenty years.
They were then persecuted, arrested and criminalized by the regional government for wanting to return to their lands. These farmers wanted to be received by President Danilo Medina Sánchez, but far from being received, they were forcibly removed from the police force, beaten and outraged. The government wants to hide the struggles of peasant families who receive greater national and international support for their cause every day".
This peasant demonstration in fact relies on the support of a large group of social, peasant, religious and trade union organizations, to ask directly for the intervention of President Danilo Medina. On 3 December, representatives of more than 30 organizations warned the authorities during a press conference that they wanted to go all the way in claiming the right to their land, which they have been working for more than 100 years. To this request they added the denunciation of the threats that peasant leaders and their families receive from private security groups.
"There are many great private interests - explains Father Miguel Ángel Gullón. Landowners want these people to leave to make room for their monocultures, especially that of sugar cane. They have been threatening, attacking and devastating their homes, their lands, their fields and their animals for years. This year serious events took place, in March, and then again in September. Eighty houses were the target of the attack. A complaint was made to the UN in Geneva". The September attack was what sparked international solidarity and the support of other social groups in favor of farmers.
This is not the first time that Fr. Miguel Ángel Gullón has denounced the terrible injustices and abuses that rural communities are suffering in the province of El Seibo (see Fides, 15/5/2017). The situation unfortunately continues to remain very tense. The group of peasants who are still guests of the Dominican Missionaries of the Rosary in the capital, inform that their families in La Culebra in El Seibo, continue to receive threats. (CE) (Agenzia Fides, 7/12/2019)