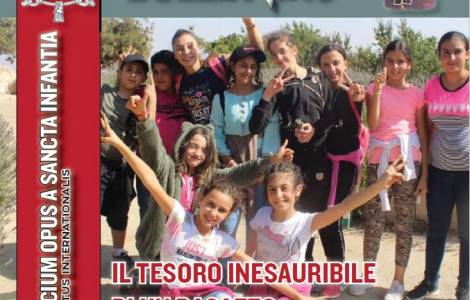 Vatican City (Agenzia Fides) - In this edition "we would like to speak especially about them, the adolescents, an age that the Society of the Holy Childhood (POSI) does not seem to be engaged with in any evident manner, especially given the name of the society, but in reality they are included and are present", said Sr. Roberta Tremarelli, General Secretary of POSI.
Sr. Roberta underlines that even POSI as in very institution, there was a certain evolution resulting from adapting to diverse ecclesial, cultural, and social realities so that the missionary dimension would be adequately developed in the young people, while holding true to the original charism.
"Today the Society of the Holy Childhood encourages all children and adolescents in the world to be protagonists in the evangelizing efforts of the Church, through prayer, personal witness of life and sacrificial offering to the Universal Solidarity Fund of the Society. In this way the proposal addressed to adolescents gave rise to the creation of a bond between the missionary child and the young missionary; a red missionary thread that will be able to be present in the life of every baptized person, helping them on their road to holiness of life".
In her speech, Sr. Érica A. Sanchez, of the Franciscana Angelina - Santa Cruz, Bolivia, takes inspiration from the path opened by the Synod of Bishops on young people, to dwell on some fundamental themes concerning the relationship between the Church and young people, highlighting that "all the members of the people of God share the unique responsibility of carrying out the evangelizing task as a continuation of the saving work of Christ, each according to their own vocation and charisms. No-one is excluded.
In this sense, the Church increasingly values the place, the value and the contribution of all its members: ordained ministers, religious, laity, elders, youth, children and women. Likewise, it is essential to rethink a ministry that knows how to accompany each one of them".
The focus of this edition, edited by the Editorial Staff, is entitled "Adolescents, the world, the Church" and starts from an analysis of the adolescent’s "critical period", of physical and psychological transformations, of formation of one's own individuality, to suggest what kind of relationship should be established with adults, and in particular with educators, so that young people can be protagonists in the mission of the Church. "This does not only mean making space for children and adolescents but building together with them, being a mission together, integrating paths and proposals to activate dynamics of true co-agonism that are more demanding but full of future".
In addition to the usual overview of the experiences and events of POSI in the world, in this edition of the Bulletin a new column debuts, "Towards holiness", in which the life of two girls, members of the Society of the Holy Childhood is narrated - Natalys from Cuba and Paulinka from Poland - who even during their suffering continued to support missionary activity with prayer and offering. (SL) (Agenzia Fides, 8/11/2019)

ASIA/KAZAKHSTAN - Family Christmas at the Ark Village, but generosity does not decrease