AMERICA/COLOMBIA - Bishops to candidates for the elections: "Governing is synonymous with dialogue, listening, building bridges and reconciling" 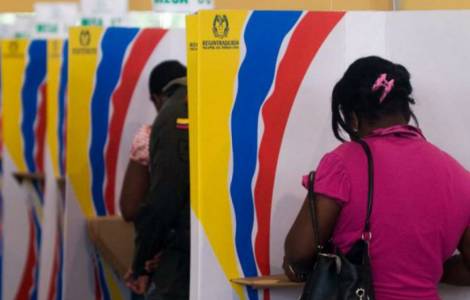 2020-03-06
"With Mary, beyond borders": the preparation of the National Missionary Congress proceeds

2020-03-03
Two other social leaders killed in northern Colombia, while President Duque is visiting the country

2020-01-31
At the service of vulnerable people: pastoral challenges on the border between Colombia and Venezuela

Bogotà (Agenzia Fides) - On 27 July the registration of candidates for the elections of mayors, governors, deputies, councilors and members of local administrative councils for the period 2020-2023 concluded. The Bishops of Colombia, greeting those preparing to launch electoral campaigns to publicize their government program, invite them to bare in mind some considerations.
The message sent to Agenzia Fides, signed by the President, Vice President and the Secretary General of the Colombian Bishops’ Conference, is divided into seven points. In first place, the importance of these elections is underlined, which "represent the opportunity to think and plan the country we want, to engage citizens in a common project of the country, and to trace paths that allow progress in the ideals of justice, truth, freedom and solidarity".
Second priority is the common effort "to cultivate and defend unity, putting a stop to the polarization" that is dividing the country. "Governing is synonymous with dialogue, listening, building bridges and reconciling" reiterate the Bishops, who therefore stress the importance of "placing at the center of every political, social and economic action, the human person, its highest dignity and respect for the common good". We must avoid the privileges that few benefit from to overcome inequality, injustice, lack of opportunities.
"In order to present realistic and clear programs that respond to the needs of the voters, it is necessary to get to know the communities well", the Bishops exhort, remembering that there are situations, in this moment in history, that require priority attention, including "migration, drug and drug trafficking, drug addiction, violence and insecurity, unemployment, crisis in the health system, poverty, environmental destruction, land conflicts".
The message of the bishops’ Conference therefore invites "to make greater efforts to put an end to the vices of politics and especially corruption", highlighting that candidates must be "absolutely transparent" regarding the buying and selling of votes, manipulations and pressure on voters, illicit financing, as "it does not pay to win the elections with corrupt practices".
They therefore reiterate that "respect for and defense of life, family, education and justice are fundamental values for society". Finally, they recall that "Colombians expect purposeful campaigns, based on ideals that characterize the right practice of politics", without insults, lies…, and hope that "this period before the elections will be full of proposals for the common good". (SL) (Agenzia Fides, 1/8/2019)

AMERICA/CHILE - The Bishops: the reawakening of Chile cannot be seen, the requests of the population have still not been fulfilled

AMERICA/BRAZIL - Tourism operators, among the sectors most affected by the coronavirus