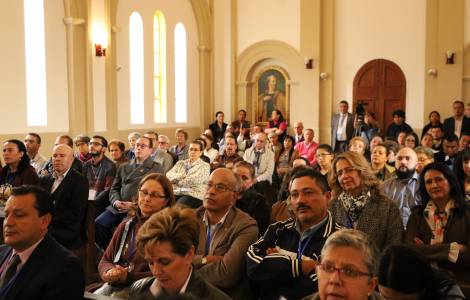 Bogotà (Agenzia Fides) - On the fiftieth anniversary of the establishment of the National Council of the Laity, the Bishops’ Conference of Colombia (CEC) promoted a national meeting which was held from July 22nd to 24th in Bogotà. The Council was born in 1969 with the active support of Blessed Mgr. Jesús Emilio Jaramillo Monsalve, who inspired the action of the laity in society.
According to information released by the CEC, sent to Fides, during the event, which gathered more than 150 representatives of the various lay movements of the Country, the Bishop of Zipaquirá, Mgr. Héctor Cubillos Peña, President of the bishops’ Commission for ecclesial movements, said that the Church is aware of the importance of the position that the laity have in the life and mission of the Church. "That is why we have given so much importance to the laity - he said -. It was also thanks to the circumstances and the last guidelines of the Supreme Pontiffs who motivated us with their word, to think ever more seriously about our lay brothers, members of our Church, who have an important mission so that the Gospel, the Word of the Lord, the presence of Jesus, can reach every corner of the social, political, economic and cultural life of humanity".
Professor Juan Carlos Gómez Giraldo, of the University of La Sabana, who held the conference on "Times of change: new challenges for the Church and the laity", said that the work of the laity in the Church is fundamental and must be understood in the context in which the person lives and works. One of the challenges facing the laity of these times is to learn from the young, who "set an example in many areas of our daily actions and have the ability to forgive each other".
Father Rubén Darío García, director of the Department of the Laity and of the ecclesial movements of the Bishops' Conference, said that at the end of the Assembly a document is presented containing an organic plan for the formation and organization of the laity with "an evangelising address", which will then give life to a new structure to accompany the mission that the laity are called to carried out in the Church. The plan considers the five areas in which the lay person is present in society: state, economic, educational, civil, family and ethical-religious. (SL) (Agenzia Fides, 27/7/2019)