AFRICA/MOROCCO - The Pope: Christians "want to do their part" in Moroccan society 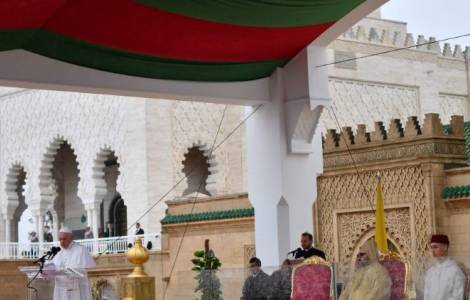 Rabat (Agenzia Fides) - Christians present in Morocco "rejoice at the place made them in Moroccan society" and "want to do their part in building a united and prosperous nation, having at heart the common good of the people". This is what the Pope addressed to the Moroccan people, the authorities and representatives of civil society and members of the Diplomatic Corps on the afternoon of Saturday 30 March, the first day of his brief visit to the North African country. As a testimony of the contribution offered by Christians to the building of the nation, the Pope in particular mentioned the commitment of the Catholic Church in Morocco, in its social works and in education through its schools "open to students of all denominations, religion and origin".
In his opening speech the Pope expressed his "sincere and heartfelt gratitude" to His Majesty Mohammed VI for "his kind invitation and for the warm welcome", and he immediately indicated in the dialogue between Christians and Muslims the heart of the apostolic visit in Moroccan land. The bishop of Rome remembered the historic meeting - eight hundred years ago - between St. Francis of Assisi and the Sultan al-Malik al-Kamil. That event shows that the prophetic courage "is a way of peace and harmony for humanity, where extremism and hatred are factors of division and destruction". In this time "when you are likely to make the differences and mutual misunderstanding of rivalries and disintegration reasons", the Successor of Peter, quoting several times the Document on human brotherhood he signed on February 4 in Abu Dhabi together with the Imam of Al Azhar, said it is essential to oppose fanaticism and fundamentalism solidarity of all believers, having as invaluable references of our actions the values that are common. Pope Francis praised the Mohammed VI Institute for imams, preachers and preachers, commissioned by King Mohammed VI, in order to provide a proper and sound formation against all forms of extremism, which "often lead to violence and terrorism and in any case, they constitute an offense to religion". The Pope reiterated "the importance of the religious factor to build bridges between people", while respecting specific differences and identities. "Faith in God" the Pope remarked "leads us to recognize the eminent dignity of every human being, as well as its inalienable rights". "We believe that God created human beings equal in rights, duties and dignity and who has called them to live as brothers and to spread the values of goodness, charity and peace". In this framework, the Bishop of Rome also recalled the urgency of recognizing and protecting "freedom of conscience and religious freedom" which "is not limited only to religious freedom but must allow everyone to live according to their religious convictions". Citing the International Conference on the rights of religious minorities in the Muslim world, held in Marrakech in January 2016, the Pope emphasized the declarations of intent formulated in that meeting, tressing the need to go beyond the concept of a "religious minority" in favor of the citizenship and recognition of the value of the person, "which must play a central character in any legal system".
Continuing his speech, Pope Francis then underlined that the hoped-for "solidarity among believers" is called to place itself at the service of the entire human family, offering original contributions to tackle global emergencies such as the ecological and migratory ones. The Pope recalled the International Conference on Climate Change, COP 22, held in Morocco in 2016, which testified once again the awareness of many nations of the need to "protect the planet where God has placed us to live and to contribute to a true ecological conversion". Then the Pope focused on the serious migration crisis, recalling the Intergovernmental Conference on the Global Compact for safe migration, also hosted in Morocco last December. After the documents adopted by that conference - Pope Francis remarked - it is necessary to pass from the commitments taken with the document, at least morally, to concrete actions and, especially, to a change of attitude toward the migrants, affirming them as persons , not as numbers". The migrants who flee from war and poverty - the Pope pointed out - "When conditions allow, they may decide to return home in safety, respectful of their dignity and their rights. It is a phenomenon that will never find a solution in the construction of barriers, in spreading the fear of or denial of assistance to those who aspire to a legitimate improvement for themselves and for their families". (GV) (Agenzia Fides, 30/3/2019)