AMERICA/COLOMBIA - The Bishops: let us persevere in reconciliation and peace, let us fight corruption, let us keep hope alive 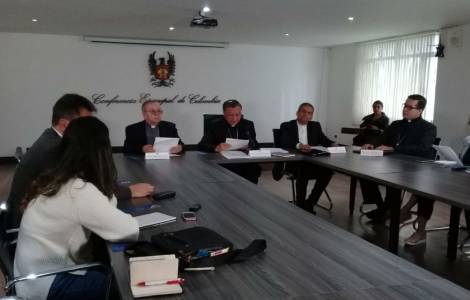 Bogotà (Agenzia Fides) - At the end of their Plenary Assembly (see Fides 4/2/2019), the Bishops of Colombia published a message to the people of God to share some food for thought which arose from their meeting.
In the text, sent to Agenzia Fides, the commitment "to persevere in the construction of reconciliation and peace" is mentioned, and for this reason "it is necessary to assume the culture of encounter, which allows us to open ourselves to all Colombians, accept the differences and deactivate hatred and revenge". This culture of encounter, as the Bishops recall, is based on respect for life, for every life, and on the rejection of the nefarious dominion of death, which is reflected in terrorism and in the various forms of violence in all environments (family, drug trafficking, insecurity ...), especially in the assassination of leaders, which has occurred in almost the whole country.
"We invite the ELN guerrilla to a serious reflection on its serious actions, with which it has deeply wounded the Colombian people and, above all, has broken the horizon of trust and peace - the Bishops continue -. This is why we call on the guerrillas to unequivocally demonstrate their will for peace, by abandoning their arms and joining the efforts of so many brothers who have left the path of violence and joined the struggle for genuine peace". Therefore they invite the illegal armed organizations "to listen to the voice of the Colombian people, to become aware of the general rejection of society towards the violence they want to impose" and ask them to abandon their criminal actions.
The Bishops then call on the national government to continue its efforts to gather all the living forces of the country in order "to define and implement an integral peace policy", in order to reach "a political solution regarding the armed conflict". "Peace is a right and a commitment of all", they reaffirm.
The second issue addressed is "the open fight against corruption in all areas". "Corruption has become entrenched in our culture - they write -, has affected the political, economic and social life of our nation, and now we passively accept it. Thus it has turned into one of the most serious scourges, which prevents progress and destroys trust in institutions". The Colombian people, who have already expressed themselves in various ways against corruption, this year have the opportunity, thanks to the elections, "to advance in the fight against this cancer of corruption and to build together the common good".
The third point concerns equity and solidarity as expressions of social transformation. In the fidelity to the history of commitment of many Colombian institutions, including the Church, in works of human promotion, the Bishops underline the need to continue today "in the commitment of service and solidarity towards the poor, the marginalized and migrants". It is time to do more to overcome the inequalities that exist between the brothers of the same nation, and also the "clamorous situation of the Venezuelan brothers in our country calls us to a more generous solidarity". Finally, they invite all the Colombian people to "keep hope alive" and to "intensify prayer, with the certainty that there is hope in Christ". (SL) (Agenzia Fides, 13/2/2019)

AFRICA/BURUNDI - "President, give us peace among Burundians": Archbishop of Gitega at the inauguration of the newly-elected Head of State

AFRICA/BURKINA FASO - "An institutional crisis must be avoided, the date of the general elections must be respected" urge the Bishops