ASIA/PHILIPPINES - Terrorist attack on the cathedral in Jolo: the Church condemns violence and calls for justice 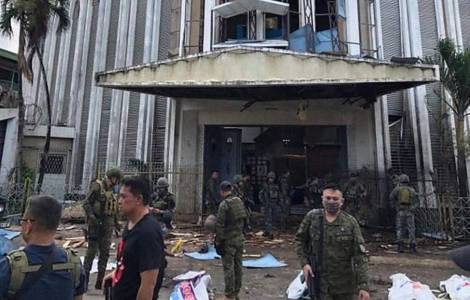 Jolo (Agenzia Fides) - Firm condemnation of violence, solidarity with the victims, proximity to the population of the South of the Philippines: this is what the Catholic Bishops of the Philippines expressed, in the aftermath of the terrorist attack which, with two explosions, struck the faithful gathered in the Cathedral on the island of Jolo, in the province of Sulu, in the southern Philippines, on Sunday, January 27, which killed 20 people and left 84 wounded. The Episcopal Conference of the Philippines, gathered in plenary assembly in Manila, described the incident "act of terrorism", assuring "condolences and prayers for the victims and their families" and asking God "to put an end to violence".
"It is really a satanic act that all religions must condemn", said to Fides Cardinal Orlando Quevedo, Archbishop emeritus of Cotabato and former parish priest in Jolo, and Archbishop Angelito Lampon, for many years Apostolic Vicar of Jolo, deploring the vile attack carried out "in a sacred day and in a sacred moment of adoration". "This is the action of evil people, who have absolute contempt for the sacredness of human life and human dignity", they said. The two Church leaders also called on the authorities "to hunt down the perpetrators of this barbaric crime and bring them to justice". "May all our religions of peace guide us in our search for a brighter future for the people of Mindanao", they said.
The first explosion took place around 8:30 am (local time) while a Sunday mass was being held in the Cathedral of Our Lady of Mount Carmel, in the city of Jolo. The second occurred at the entrance of the church at about 11 o'clock, when aid and police officers arrived, five of whom were killed.
And while the Philippine Armed Forces (AFP) saw to evacuating the faithful and safeguarding the area, the Islamic State claimed responsibility for the attack, issuing an official statement in which they spoke of two suicide bombers. According to the authorities, "The terrorist group Abu Sayyaf, active in the area since the 90s, has claimed responsibility for the incident.
The explosions occurred a week after the referendum on the Bangsmoro Organic Law, which establishes a new region, the Autonomous Region in Mindanao. Although the overall results of the referendum have seen an overwhelming majority of voters approve the "Bangsmoro Organic Law" proposed by the government and already passed in Parliament, it should be noted that in the province of the Sulu Islands, where the island of Jolo is located, the majority of the population voted against the BOL. The new law will give a new structure to the region by establishing the Bangsamoro Autonomous Region in Muslim Mindanao (BARMM), which should correct the historical injustices committed against Muslims in the region (over 5 million) over the centuries. The new region, in fact, is a political entity that allows the populations a regime of self-government in tax and administrative matters, leaving the foreign and security policies to the central government. (SD-PA) (Agenzia Fides, 28/1/2019)

AMERICA/COLOMBIA - Violence in Arauca even at Easter: four people killed, including two children