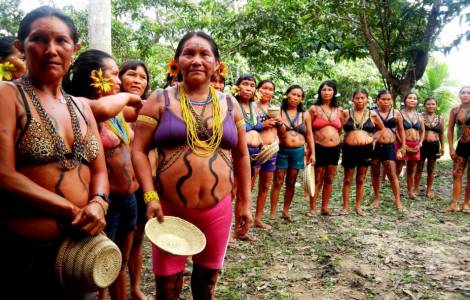 2021-11-17
Opening of the Jubilee Missionary Year: "The Church in a permanent state of mission"

2021-11-05
Different and convergent approaches to mission: the course for Ad Gentes missionaries

São Gabriel da Cachoeira (Agenzia Fides) - In the Baniwa society, the traditional role of women was to take care of their children, their husbands, their jobs, "today things have changed, now we have the freedom to speak", says to Agenzia Fides Maria Bitoca Castro, a retired teacher who belongs to the Baniwa people, one of the 23 indigenous populations who live in the Alto Río Negro region, in the diocese of São Gabriel da Cachoeira. The Baniwa, an ethnic group from Brazil, Venezuela and Colombia, have a population estimated at around 15,000.
According to the teacher, "only men could speak in the past". Currently women work together to improve family income, to give more value and recover Baniwa crafts, teaching children and young people.
In fact, the indigenous teacher tells Fides that during her years of teaching she has always tried to make students understand the need to preserve culture, to know the history of their people.
Maria Bitoca explains that in the indigenous communities the role of women is very important: today, for example, there are catechist women who take care of pastoral work, something that did not exist in the past. "I think it is very important for us, women are respected by the community and they have earned respect thanks to the help of the Church", recognizes the teacher.
Jaqueline Fonte, a young student from the same Baniwa community, speaking to Fides about the life of young indigenous people, explains that usually everything revolves around everyday things, "there are young people who participate in the life of the Catholic Church and who still appreciate traditional culture", nevertheless she underlines the need not to forget the children who are moving away from these values.
For some months, this community was followed by an indigenous priest, considered a very important fact thing because, according to Jaqueline Fontes, "he helps people to be closer to religion, he serves as a source of inspiration".
The two indigenous women tell Fides of the importance of praying in their own language, so the Church helps to save the traditional culture. Then they insist on the respect for Mother Nature, and ask for a Church that is more missionary. (LMM) (Agenzia Fides, 19/12/2018)