AFRICA/NIGER - Bishop of Niamey: “Fr Maccalli is alive and well”; we continue to pray for his release 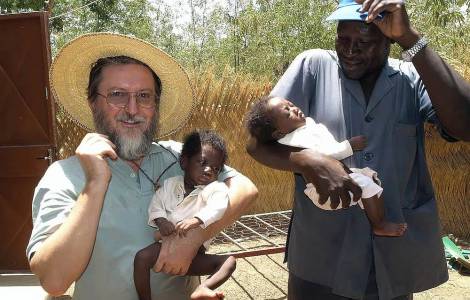 2020-01-16
Fr. Luigi Maccalli still a prisoner: prayer and hope of many people continues

2020-01-10
Attack against soldiers on the border with Mali; according to a Bishop, the jihadists intend to occupy the Sahel region

2019-12-20
"Threats against Christians in the area of Bomoanga and targeted killings for others", reports a missionary

2019-11-18
Prayer for the release of Fr. Pierluigi Maccalli 14 months after his abduction

2019-10-09
"Staying too long in power is detrimental to the well-being of the country", says the President of Niger

Niamey (Agenzia Fides) – “The Bishop of the diocese of Niamey, Mons. Djalwana Laurent Lompo, affirms that Fr. Pier Luigi Maccali, SMA missionary kidnapped on 17 September is alive and well. For security reasons he could not reveal the elements on which the news is based, but he asked us to believe that he speaks in sincerity and truth”: said a report sent to Fides by Fr. Désiré Salako, of Beninois nationality, of the District of the African Mission Society for (SMA), District Superior of the Society for African Mission (SMA) of Benin-Niger, territory to which the mission of Fr. Pier Luigi Maccali, SMA missionary abducted (see Fides 17/9/2018) and sill in captivity, belongs.
“Fr. Désiré Salako was the first to have news of the kidnapping of Fr. Gigi, and since then as his friend and confrere and as SMA Superior, follows closely the evolution of the event, keeping contact with the Niger authorities on behalf of the SMA” Fides was told by Fr Marco Prada, of the SMA community in Genoa.
“Last week Fr. Désiré Salako visited the provincial house in Genoa, and was able to meet family members of Fr. Gigi in Madignano, province of Cremona. We asked him many questions and we all hope soon to see Fr. Gigi well and safe and in good health. Fr. Salako assured us that no one has forgotten Fr. Gigi, and all are working in different ways to obtain his release. He passed on to us a message from the Bishop of Niamey, confirming that p. Gigi is well”.
“The main concern of the Niger authorities and also of the Italian embassy in Niamey, is the safety of Fr. Gigi, and that no action taken may endanger his life ” continues Fr Prada. “We all hope that this event will have a successful ending without useless violence. This is why, said Fr. Desiré, we must have patience. Time passes and apparent silence and lack of news must not be interpreted as inactivity. On the contrary it is a fruitful atmosphere for the sides to have contact with discretion and reciprocal trust.”.
Fr. Salako expresses gratitude for prayers offered in many parts of Italy and in other countries for the release of Fr. Gigi and others held prisoner in Sahel. “Let us pray for peace and harmony in Niger, for the serenity of the small Christian flock in that country . Let us continue to pray with insistence, perseverance and trust keeping alive the flame of attention and affection for Fr. Gigi”, says Fr. Prada, asking for prayers for those “involved in the efforts for the release of Fr. Gigi and the other hostages, that they may be enlightened by the Holy Spirit and find opportune means to conclude their efforts successfully”, he added.
Lastly Fr. Desiré asks for prayers for the kidnappers: “Jesus said Christians dare to pray for their enemies because they believe that God can change hearts and infuse sentiments of humanity and justice. He stayed only a few hours with us but his visit was providential and helped us to feel close to Fr. Gigi. Let us all pray that Christmas will bring the gift of his release”, the SMA missionary concludes SMA. (MP/AP) (4/12/2018 Agenzia Fides)