ASIA/INDIA - Indian Christians pray against evil and violence, in communion with the Pope 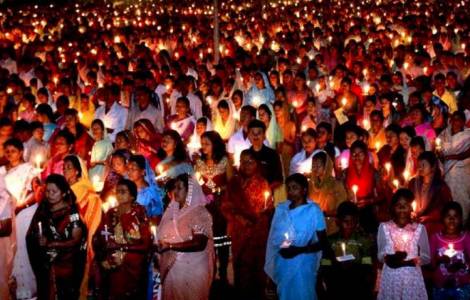 2021-10-27
Violence against Christians, "flagrant violation of the Constitution"

New Delhi (Agenzia Fides) - Christians of different confessions in India today observe, October 1st, a special day of prayer for the Christian communities present in India and will live a time of assiduous prayer in the month of October, in communion with Pope Francis. "It is the second year in which a special prayer vigil is organized at a national level, to entrust Indian Christians to God in times when they are still touched by violence and persecution", explained to Agenzia Fides Shibu Thomas, Christian Protestant leader, among the organizers of the day.
"Prayer is the need of today and is the only resource we have. Indian Christians desperately need to resort to continuous, ardent, coherent prayer, full of faith for the persecuted Church and against the forces of evil, as Pope Francis asks", he continues.
The Indian Christians of all confessions have decided to continue to pray, for the entire month of October, for some special intentions, invoking the divine protection on all the communities of baptized present in India. We will pray for the release of the faithful who are still held in prisons for having preached the message of Christ and for all Christians, so that God may give them perseverance and faith in facing injustice, persecution, pressure to abandon faith. "We will pray for the unjustly and falsely incriminated Christians, in various states of India, on the basis of the so-called anti-conversion laws in force", said Thomas and also for those who face the refusal of families, friends and communities, for having chosen to follow Christ.
Another special intention is to ask God for the grace to forgive persecutors, recalling "the prophet Daniel who did not hate his persecutors, but humbled himself and sought the mercy of God, to give a testimony of true love".
The Indian organization "Persecution Relief", among the organizers of the day of prayer, counted 40 cases of gratuitous violence against Christians from August to September 2018, noting how many of the faithful have been "witnesses of the miracle of prayer". Prayer is normally held on October 1, the day on which Pastor Philip George was released from prison two years ago.
Pastor George, who ran an orphanage, was imprisoned on false charges of sexual harassment on minors. "Without any evidence, he was imprisoned for 666 days, victim of a huge conspiracy", Thomas explained. The pastor's wife prayed and fasted for a long time to demand the release of an innocent. Although the accusation presented 32 false witnesses against the Pastor, the court understood the plot, rejected the evidence and was acquitted. (SD/PA) (Agenzia Fides, 1/10/2018)