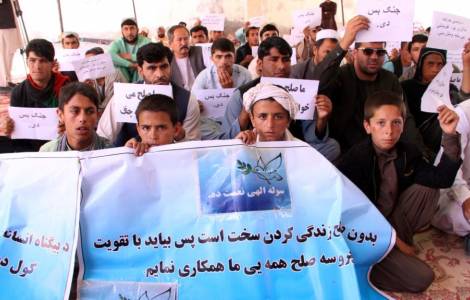 2021-07-09
Civil society leaders: violence increases, a UN mission is urgently needed to ascertain the truth about the attacks

2021-06-21
The Archbishop of Mandalay: "It is a real tragedy. We are grateful to Pope Francis for the support"

2021-06-21
Truce in Chin State: displaced people begin to return to their homes, priests engaged in assistance

Kabulk (Agenzia Fides) - The Helmand Peace Movement, an organization for the promotion of peace born after a suicide attack in Lashkargah, which took place last March, "is certainly a positive experience because it reveals a popular will for change.
Probably many of the people involved no longer want to support forces responsible for years of different conflicts. However, at this stage it is still too early to say whether this push could be a real breakthrough for Afghanistan because there are still strong interests of the various forces in the field". This is what Francesco Brunello Zanitti, President of the Institute of Higher Studies in Geopolitics and Auxiliary Sciences (ISAG), based in Rome, told Fides, referring to the new Afghan peace movement.
The scholar emphasizes how the organization, in order to be successful, should be able to "dialogue with the Taliban who, strengthened by recent successes, may not be willing to carry out peace talks with the government, often perceived as weak". "Moreover - he points out - it should not be forgotten that the territory of Afghanistan has been influenced by the advance of Daesh in the last years and will be necessary at the same time to evaluate the interests of external actors: United States and the European Union (who do not have the intention to leave Afghanistan, as required by the movement), Russia, Iran and especially Pakistan".
Professor Zanitti explains that most of the protesters are young people who use social media as a tool for the dissemination of their initiatives. However, "some of the participants are older and there is therefore the theme of a war memory. Furthermore, in rural areas both the Taliban activities and government moves are often perceived negatively; therefore in the villages there is little difference on those who carry out violence. The goal is to stop and make people believe that there can be a better future for these territories".
According to the President of ISAG, the perspectives of the movement seem to be linked to their ability to aggregate requests from other sectors of Afghan society, such as urban areas or the more well-off social classes: "If the movement remains isolated, it will not have great results and will be limited by the Taliban, government forces and forces in the field, who may feel threatened by this movement. Representatives of the Helmand Peace Movement met Afghan President Ashraf Ghani, American and Pakistani diplomats, and also the Taliban in recent months. These have already accused them of being conspirators at the service of foreign interests. If the movement manages to influence the interests of the forces in the field, then it will succeed, but it will take time".
Among these forces, religious authorities "play an important role in Afghan society and could therefore provide support for the new peace movement. Some religious have asked the Taliban to respond positively. However, part of the religious authorities follows fundamentalist tendencies and I do not think it will abandon support for the Taliban or for those political groups that propose a fundamentalist agenda", concludes the scholar. (LF) (Agenzia Fides, 10/9/2018)