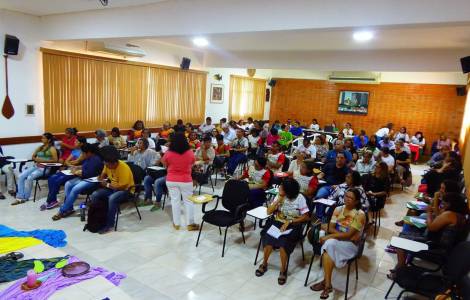 2021-04-17
Bishops: "We cannot be silent when life is threatened, rights are not respected, justice is corrupt"

2021-04-07
Two online courses on missionary formation: "Formation for the mission" and "Biblical sources for the Mission"

2021-03-27
A missionary: "The Church accompanies the peoples of the Amazon on their path of joy and authenticity"

2021-03-23
Fraternity Campaign Collection: Fundraising appeal for families affected by the effects of the pandemic

Manaus (Agenzia Fides) - Speaking of trafficking, the first attitude to be taken "is to put yourself in the shoes of victims". In reality, trafficking is a violation of human dignity and rights, a commodification of life, underlines the religious Eurides Alves de Oliveira, who is part of the "Un grito por la Vida" Network.
One of the regions where trafficking has increased drastically is the Amazon, where the number of routes has multiplied.
Faced with this scourge, it is necessary, as Sister Rose Bertoldo affirms to Fides, "to establish mechanisms of confrontation that make the problem visible through denunciations and punishments of the guilty, increasing the work of prevention and political incidence".
The phenomena of migration and human trafficking were the subject of the Seminar "Forced Migration and Human Trafficking" organized by the Northern Region 1 of the National Conference of Bishops of Brazil, CNBB, which took place in Manaus, from 31 August to September 2, with the participation of over a hundred representatives of the nine dioceses and prelatures that are part of the region.
In terms of migration, we can say that Latin America is the region with the highest number of migrants and that new migratory routes are appearing in the Amazon, underlined sociologist Marcia de Oliveira, councilor of the Pan-Amazon Synod. In her statements to Fides she affirms that "groups specialized in exploiting the work of immigrants have increased" and underlines the role of "institutions, both inside and outside the Church" that take migrations as the reason for their work. In the face of xenophobic attitudes and persecutions suffered by immigrants and by the institutions that support them, the sociologist insists on the need to think about the issue of hatred against immigrants in our ecclesial communities.
Mgr. Evaristo Spengler, prelate Bishop of Marajò, member of the special pastoral Commission for the fight against human trafficking, CEPEETH, of the Bishops' Conference of Brazil, recognizes that the arrival of Pope Francis contributed to making the phenomena of migration and human trafficking more visible, insisting that "we are a society that has lost the ability to cry and have mercy".
Together with Mgr. Spengler, the President of the Northern Region, Bishop of Roraima, Mgr. Mario Antonio da Silva, presented the work carried out by the Catholic Church in its diocese during the Seminar, which is the door for Venezuelan immigrants seeking refuge in Brazil, insisting that work to help immigrants and fight trafficking must be everyone's commitment. (LMM) (Agenzia Fides, 4/9/2018)