AMERICA/NICARAGUA - The Organization of American States condemns Ortega for repression 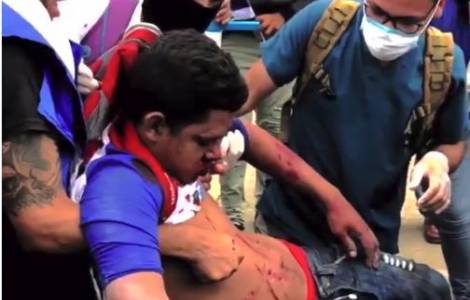 Managua (Agenzia Fides) - On the same day in which 39 years ago (1979) the Nicaraguan people announced the popular victory against dictator Somoza, yesterday, 18 July 2018, the Permanent Council of the OAS (Organization of American States) approved the resolution condemning the regime of Daniel Ortega for repression with 21 votes in favor, 3 against and 7 abstentions. The approved resolution condemns the government of Ortega and Murillo for human rights violations, calls for early elections to be held by spring, to dismantle paramilitary groups, to guarantee human rights and to welcome an international commission.
In the meantime, violence does not stop in the country, clashes and protests that exploded three months ago (on April 18) do not show signs of diminishing. Police and paramilitary forces, together with the turbas (civilians paid by Ortega), took control of the center of Masaya yesterday, a city 30 km from the capital, which became one of the symbols of the opposition to the government of President Ortega. The clashes lasted more than 7 hours, in particular in the area where the indigenous community of Monimbo resides. Here, in the neighborhood that had held a courageous resistance, 3 deaths were recorded. Military forces went from home to house terrorizing the population.
Fides has received testimonies from missionaries who inform about the tremendous violence of the military against the population, and the method of "isolating" some neighborhoods, where not even the international press managed to arrive to inform about the affair. These groups apply a "terror strategy" to subdue the population that resides there. The population, however, does not give in and every citizen has become a reporter: from the windows of the house or hidden behind a door, they can film with their phone every attack and violence carried out by the paramilitaries, to inform the Nicaraguan Association for human rights and other institutions for the defense of citizens.
The Apostolic Nuncio to Nicaragua, Archbishop Waldemar Stanisław Sommertag, had summoned media operators to declare his deep concern about the "tragic moment" of Nicaragua: "With all my human and spiritual strength, I invite everyone's consciences to reach a truce and allow a rapid return to national dialogue in order to find an appropriate solution together and therefore solve the crisis". Mgr. Sommertag had personally visited the church of Divine Mercy to see the situation after the siege.
Among the reports disseminated through social media directly by the protagonists and victims of this violence, also sent to Fides, it is worth mentioning the testimony of Father Augusto Gutiérrez, parish priest of the indigenous community of Monimbo: "four hours of attack took place with heavy war weapons: the church is completely destroyed. What the government is doing is very unfair. It is a genocide. It has no other name". Then he launches an appeal: "In this neighborhood there are humble people, they are all indigenous and workers. The government is killing us". (CE) (Agenzia Fides, 19/07/2018)

AMERICA/MEXICO - The Bishop of Veracruz on migrants: "the position of the Church is to protect and help them while they are in our land"