ASIA/BANGLADESH - "War on drugs": an approach that respects human rights is necessary 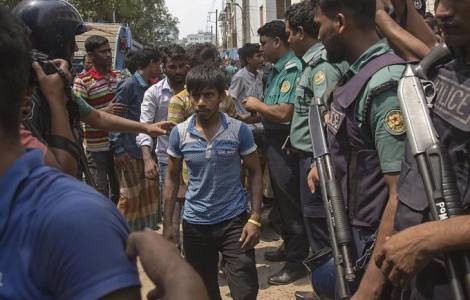 2020-05-28
Release of detainees to contain the coronavirus: it is "a right step" according to the Church

2020-05-26
PMS National Director: "The poor people of our country contribute to the Fund for the victims of Covid-19"

2020-05-12
A Bishop: the coronavirus teaches us the lesson of unity and the common good

Dhaka (Agenzia Fides) - An approach respectful of human rights and dignity regarding the problem of drugs in Bangladesh is urgent: says to Agenzia Fides Rita Haldar, a social assistant who works in Dhaka, commenting on the "war on drugs" that security forces in Bangladesh have launched, killing over 140 people and arresting 18,000 in three weeks. This is the result of the campaign promoted by Prime Minister Sheikh Hasina, who, according to some observers, has accepted an approach used by the President Rodrigo Duterte in the Philippines. The anti-drug campaign was approved by Hasina on May 15th. Bangladesh is considering the introduction of the death penalty for drug-related crimes.
The campaign aims to stop the spread of the "ya ba", as it is called in Bengali, a methamphetamine which in the country records a turnover of 3 billion dollars a year, according to government figures.
"There is a violent and repressive approach, which does not rule out extrajudicial killings and arbitrary arrests, and the repression in the country must stop", notes Haldar. "An alternative to killing and arresting people indiscriminately is urgent", she says. "People who have problems with drugs in the country need to follow a process of rehabilitation and reintegration into society rather than violence or being eliminated. The government's campaign is against human rights and dignity", says Haldar to Agenzia Fides.
Human rights activists say Prime Minister Hasina and her Awami League (AL) party intend to curb the illicit drug market and use it as a political tool to win political elections scheduled for 2018. "The anti-drug campaign in Bangladesh sows terror and it will consolidate political power, but it will not serve to eradicate drugs", they say.
According to activists, the campaign in Bangladesh is based on dubious data and testimony: the government in Bangladesh says, without concrete evidence, that seven million citizens are addicted to drugs. Alleged drug dealers were killed during police operations.
In Bangladesh, the government was already accused of persecuting political opposition and human rights defenders, prior to this "war on drugs". "If the government's true intention is to tackle the drug problem in Bangladesh, we should look at effective public health models implemented in some neighboring countries", concludes Haldar.
In Malaysia, the government has implemented social programs that consider drugs as a "public health issue" and not as a mere public order problem. In Thailand, after a punitive approach followed in the era of President Thaksin Shinawatra, civil society has supported a change in this policy, introducing a more pragmatic and health-oriented approach, notes Jonas Bagas, an activist working for "Apcaso", a regional Ong network. "These programs – he notes - are not perfect, but they reveal a more human and even more effective approach to the problem of drugs and consumption". (SD) (Agenzia Fides, 12/6/2018)