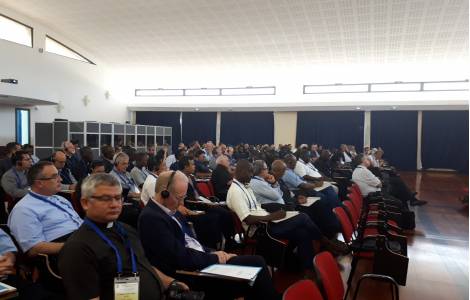 2021-10-21
Archbishop Dal Toso: the missionary enthusiasm of a young woman, Pauline Jaricot, an example for today

Sacrofano (Agenzia Fides) - "I am very happy to start today my first general assembly with you ... As you know, I am new and I have to learn a lot from you in this task that the Holy Father has entrusted me". This is what Archbishop Giampietro Dal Toso, Adjunct Secretary of the Congregation for the Evangelization of Peoples and President of the Pontifical Mission Societies (PMS), appointed Archbishop last November, said during his speech to the General Assembly of the PMS, which opened its working session today (see Fides 25/05/2018).
The Archbishop emphasized the need to create bonds of collaboration, as "the Pontifical Societies can only work if we feel united in our common task of raising awareness and forming for the mission and supporting the young Churches". He then spoke about two main themes: the meaning of mission and the reality of the Pontifical Mission Societies.
"First of all, mission is a call from God in Jesus Christ, to whom we give an answer - underlined Mgr. Dal Toso -. It is not an initiative of the Church - so to speak - but of God in Christ. In fact, his last words on earth, before ascending to heaven, were: "Go, therefore, and make disciples of all nations, baptizing them in the name of the Father, and of the Son, and of the holy Spirit" (Mt 28:19). It is in the perspective of these 'instructions' that we must read the missionary mandate and our role as Societies within it".
Citing the Holy Scriptures and the Magisterium of the Church, the Archbishop emphasized that "the mission for the Church is not merely an option among many, but it is that desired by Christ; to achieve this, it received and constantly receives the gift of the Holy Spirit" and warned against a danger: "it is not about spreading an ideology, or a culture, or a new morality, but it is about transmitting that same divine life that acts in us and saves us, and that we received thanks to the death and resurrection of Jesus. Therefore mission begins in us!" In this regard the words of both Benedict XVI and Pope Francis remain fundamental: "at the beginning of Faith there is a personal encounter with Christ".
He then paused to reflect on the link between the sacrament of baptism and the proclamation of the Gospel, and on the need for redemption that exists in man. "We must perhaps learn to look at our theme starting from the person, who is internally wounded by evil, and asks to be healed. In this sense, mission truly acquires a universal dimension and so we understand why it is an intimate need for the Church". The Church does nothing but respond to the invocation of every man, who asks God to meet him. "And God gave himself a face for us in Christ ... The Gospel is summarized in the kerygma, that is, in the proclamation of Christ who died and rose again, in the proclamation that God loves every man and wants his good".
Then the President of the PMS drew attention to the fact that "today mission now assumes different faces, even the same missio ad gentes". In addition to the classical challenge of the proclamation to pagans in mission territories, there is the challenge to help Christians to be able to cope with modern secularized culture. "The media, the social media, the internet, do not know frontiers and also penetrate the mentality of those who have a natural religious attitude. Mission is therefore to help our Churches in mission territories to build solid personalities of faith". A dual new frontier of the missio ad gentes is found in the areas of ancient evangelization, where many people who do not know the Gospel live, and many others come from cultural contexts alien to Christianity, to whom the name of Jesus must be proclaimed. "This multiplicity of challenges teaches us that, apart from the historical changes taking place, indeed, precisely because of the historical changes underway, mission, and specifically the missio ad gentes, remains a permanent call for the Church today. And we must be the first to be convinced! "
Then Mgr. Dal Toso focused on what role the PMS can have today for the Church's mission, starting from the observation that "the Societies have lost nothing of their topicality. If it is true that mission remains at the heart of the Church and that mission is also necessary in today's world, then even the Societies that support this mission, maintain all their value". In order to adapt the Societies to the new requirements of the mission, the President of the PMS indicated, as a priority, the support for the formation of the various pastoral operators in mission territories, a path already undertaken in recent years.
Starting from the image of the body used by St. Paul to describe the Church, the Archbishop pointed out some points which one cannot ignore: communion with the Pope, "titular subject of the Societies themselves", therefore communion with the international Secretariats, which are not "decision-making centers", but have the tasks of guaranteeing unity, ensuring missionary animation, promote redevelopment. Communion between the national Directorates and the local Episcopates are two other aspects.
"Communion is therefore the profound reason that links this great institution that are the Pontifical Mission Societies - underlined Mgr. Dal Toso -. Finally, I feel compelled to repeat to you what the Pope told me a few weeks ago about our task. He used the term 'creativity'. We are creative. There are no pre-established schemes for our action, except those established by the Statutes to govern our collaboration. I am sure that if you have a missionary zeal, you will know how to find concrete ways to express it". (SL) (Agenzia Fides, 28/05/2018)

EUROPE/POLAND - On the eve of Mission Sunday, the Pontifical Mission Societies of Poland inaugurate their new website