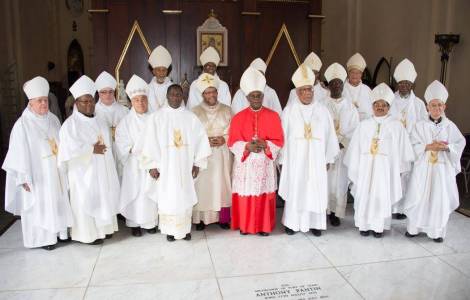 2018-01-09
Appointment of the National Director of the PMS, Fr. Esteban Kross

2017-09-20
Critical situation and huge damage due to hurricane Irma: Bishops close to the population

2012-12-28
Patriarch Gregoire III: nobody has the right to arm Christians


Antilles (Agenzia Fides) – “We live on small islands exposed to meteorological phenomena. Last year we had a series of category 3 hurricanes, one after the other. The damage was unbelievable. Our region is defenceless ”. This was part of a report sent to Fides by Romereports Agency and given by Archbishop Charles Jason Gordon, of Port of Spain, Trinidad and Tobago, in Rome on 16 April, while he was in Rome for the Ad limina apostolorum Visit with 22 bishops of the Catholic Bishops’ Conferences of the Antilles (AEC). These visits offer Bishops the chance to reflect with the Holy Father on fundamental issues such as missionary work, new evangelisation, vocations and in particular the vulnerability of the region.
The AEC includes Bishops from 24 territories, a complicated political, cultural, religious, demographic, geographical, historical and linguistic realty. The diversity of the Antilles is visible in the life of the local Church. In most of the islands the majority of the people are Catholics, in Guadalupe and Martinique, Catholics are over 80%, but in others such as Cayman and Jamaica, Catholics account for less than 4%.
In the same report Bishop Gabriel Malzaire of Roseau, Dominica, affirms: "We must increase awareness of the seriousness of climate change. Dominica is known as the Caribbean’s ‘natural island’. It has a spectacular vegetation but frequent hurricanes cause much damage and we have to work hard to help the forest grow again".
Difficulties facing the people and the Church in this region include religious sects, secularisation, family crisis, scarcity of vocation, concern for the future for young people, social tension, poverty, climate change and in particular the scourge of human trafficking. To tackle these challenges the Catholic Church in the Antilles organises once every three years a meeting for youth to study and strengthen the faith reflecting on papal teaching. This year the meeting will be held in July and will reflect on Pope Francis’ apostolic exhortation Amoris laetitia".
“We will discuss Amoris Laetitia and everyone is enthusiastic. We have another youth group in Panama. We have started to collect funds and hold preparatory meetings. The projects are underway . They are preparing for World Youth Day in Panama" Fides was told by Archbishop Charles Janson Gordon, responsible for Port of Spain, Trinidad and Tobago.
The Bishops agreed on the importance in pastoral care to use patience, mercy and special care for families. Despite its fragility, the peculiar needs of the Caribbean family, its capacity to recuperate and its inclusive nature, it remains a point of strength and a sign of hope for the entire society.
The Catholic Bishops’ Conference of the Antilles (AEC) comprises the Bishops of Lesser Antilles, Jamaica, Belize, Guyana, Suriname and French Guiana. AEC is also a member of CELAM, the Council of Catholic Bishops’ Conferences in Latin America and the Caribbean(CELAM). The Catholic Church in Antilles is composed of 5 archdiocese, 14 dioceses and 2 missions sui iuris. (LG) (Agenzia Fides 26/04/2018)