AMERICA/BRAZIL - New LaSallian community in the heart of the Amazon: "a return to the roots, with the poorest among the poor" 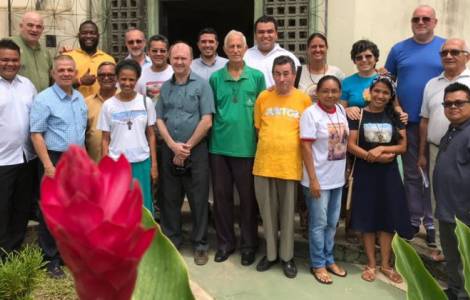 2022-05-18
"Sister Churches": collection of Pentecost for the mission in Mozambique

2022-05-06
Conscious choices for the good of the Amazon and the community: Repam-Brazil campaign ahead of the elections

2022-04-30
Bishops call for urgent change of course: "The situation is very serious"

Tabatinga (Agenzia Fides) - The Brothers of the Christian Schools have opened a community in the heart of the Amazon, where they will be at the service, with their educational charisma, of mainly fishermen and indigenous peoples of mixed races. The initiative responds to the invitation of Pope Francis to be a "Church that goes forth", and to "a need of our general chapter of 2014, which asked each region to open a community in a 'border' place or 'suburb' ", as brother Cláudio Da Silva explained to Agenzia Fides.
The Latin American region therefore coordinated the opening of the house in Tabatinga, at the invitation of the local Bishop, Mgr. Adolfo Zon, sending four brothers already resident in the region: a Venezuelan, Brazilian and two Colombians. The community was inaugurated on January 12th. After the first weeks the four LaSallian missionaries participated in a formation course on the Amazonian reality organized in Manaus by the Pan-Amazon Ecclesial Network (Repam), together with other religious who recently arrived in the area.
"For us, as brothers of La Salle, it is a challenge to come to these regions as missionaries" explains brother Cláudio, "because we are used to serving in our big schools, a very specific mission in the Church. But when we agreed to come, we saw the opportunity to return to the roots, or to be with the poorest of the poor. I believe that this mission will be, not only for me but for our entire Institute, a sign of hope, because accepting the mission of the Church in the Amazon is to seek the Kingdom with another way of evangelizing".
Among the many needs of the population, one surprised Brother Cláudio: the young. "There are very few in the Christian communities and many are seen in the streets", he says. "Many have bad habits, especially drugs. It is a situation that challenges me to try to help them find healthier ways for their lives", the religious says. Tabatinga is a town of about 60 thousand inhabitants, in the western part of the Brazilian state of the Amazon, in the "triple border" between Brazil, Colombia and Peru. It is the seat of the diocese of Alto Solimões. The Brothers of the Christian Schools who have settled there will initially dedicate themselves to youth ministry and to the formation of community leaders in the villages, to work with the indigenous, to the formation of teachers in the river areas and to university pastoral care. (SM) (Agenzia Fides, 12/02/2018)