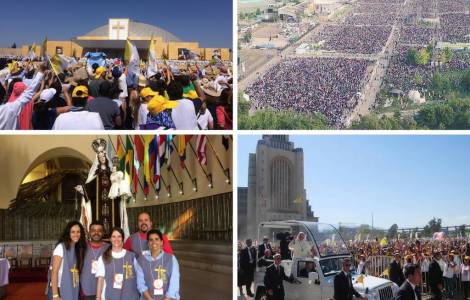 2020-07-15
On the journey with the Virgin of Carmen, united to build a more just and supportive society

Santiago de Chile (Agenzia Fides) - An invitation to hope, to "continue to rise again after the collapse", not to stop believing in the transforming power of God the Father, to "work for peace". And to say "no to the violence that destroys", in search of "paths of dialogue for unity", always attentive to all situations of injustice and new forms of exploitation, to the precariousness of work that destroys lives and houses, to those who take advantage of so many illegal immigrants. All this without forgetting that "we are all important and we all have something to give". These are some of the themes that in particular affected pilgrims and volunteers during t Pope Francis’ apostolic visit to Chile, which took place from 15 to 18 January.
Three days in which the Holy Father presided over three Eucharistic celebrations with a great participation of the faithful and various meetings in three cities of the country: Santiago, Temuco and Iquique. Almost a million and a half people were present at these events. The 20,000 papal volunteers, as reported by Ronald Bown, director of the Volunteer Department of the National Commission for the Pope’s visit to Chile, "worked heroically, remaining up late, even fasting, but always enthusiastic, transmitting to all the pilgrims, with effort, sacrifice and joy, the meaning of their mission of service and prayer".
"The Pope spoke to us of hope, of remaining steadfast in spite of adversity", says to Agenzia Fides Jaime Espinoza, one of the 400,000 pilgrims present at the Mass in O'Higgins Park, in Santiago, on Tuesday, January 16. "He reminded us that we must be brothers, as a Chilean society, even if we are different we must be tolerant and respectful. We must work for justice and use the mercy of our words and actions", he said, recalling the invitation launched by the Pope during his homily to work for peace.
At Maquehue Air base, in Temuco, on Wednesday 17 January, in front of 200 thousand people, the Pope invited everyone, in particular, to be craftsmen in unity, recalls Sebastian Corana, one of the participants to Agenzia Fides, adding that "Temuco is an area marked by conflict; after listening to the Pope’s message, each of us is called, in his context, to dialogue and build bridges to achieve the peace that is so necessary" (see Fides 17/1/2018 ).
On the afternoon of Wednesday 17, the Pope returned to Santiago to meet over 50 thousand young people in the National Shrine of Maipú, as well as more than 900 thousand people who took to the streets only to see him pass by. During the meeting, the words of St. Albert Hurtado were the protagonists of the invitation that Pope Francis launched: "boys, love your Chile" and always ask yourselves "what would Christ do in my place?" (see Fides 18/01/2018).
"The Mass in Lobito made unity in the diversity of the Church palpable. Many charisms, ecclesial movements that pray together with Francis for a more welcoming and joyful Chile", says Maria Graciela Garrido, one of almost 100 thousand pilgrims present in Iquique to participate in the Mass celebrated by the Holy Father in Campus Lobito, on his last day in Chile. A celebration marked by the importance of immigrants in the Country to whom the Pope recalled that "openness to immigrants and foreigners is a sign that Christ acts in our hearts" (see Fides 18/1/2018). (LG) (Agenzia Fides, 23/01/2018)