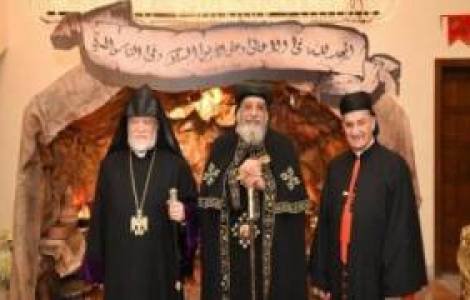 2020-01-17
Melkite Patriarch: we are in the Middle East not to "spread the Christian civilization", but to demonstrate the work of the Holy Spirit in our life

2019-08-06
The Egyptian government "legalizes" another 88 churches built without permits. The total number rises to 1109

Cairo (Agenzia Fides) - Coptic Orthodox Patriarch Tawadros II, Maronite Patriarch Bechara Boutros Rai and Apostolic Armenian Catholicos Aram I are the most prominent representatives of the Eastern Churches who took part in the International Conference on Jerusalem in progress in Cairo on the initiative of the University of Al Azhar, the major theological-academic center of Sunni Islam: "The Arab identity of the Holy City (al Quds, Jerusalem) and its message"
In his speech, Patriarch Tawadros insisted on the connection that inevitably links the prospects of peace in the Middle East to the respect for the national rights of the Palestinian people: "True peace" said among other things the Primate of the Coptic Orthodox Church "will not become reality until violence, threats and all promises made are stopped without taking into account the sentiments of Muslims and Christians in the world and in our region". Maronite Patriarch Rai, in his speech, recalled the position of the Holy See, which even without intervening directly on the disputes concerning the territorial sovereignty of Jerusalem, repeatedly reaffirmed the right of the Palestinian people to have a State, following the UN resolutions that reject the Israeli annexation of the entire Holy City.
The participants in the Conference on Jerusalem come from 86 different Countries. Many Christians and Muslims, come from Lebanon, including, among others, former Prime Minister Fouad Siniora, former Minister of Culture Taqrek Mitri, Secretary-General of the Committee for Muslim-Christian dialogue. Mohammad Sammak and former Lebanese Head of State Amin Gemayel. Palestinian President Mahmud Abbas also took part in the Conference.
Announced already last July, after tensions and violence exploded in previous weeks around the Mosques compound and the Muslim Holy Places (see Fides 27/7/2017), the Conference should have been held already last September. After the postponement, the decision of the US Administration to recognize Jerusalem as the Capital of Israel has brought the Holy City back to the center of local and international tensions, contributing to increasing the interest around the Conference promoted by Al Azhar.
Archbishop Bruno Musarò, Apostolic Nuncio in Egypt, and the Pope's personal secretary, Monsignor Yoannis Lahzi Gaid, took part in the Conference of al Azhar, who on the morning of Wednesday 17 January read during the works the Arabic text of a message sent by Pope Francis. In his message, Pope Francis reiterated that the Holy See "will not cease to urgently call for a resumption of dialogue between Israelis and Palestinians for a negotiated solution, aimed at the peaceful coexistence of two States within the agreed and internationally recognized borders, in full respect of the peculiar nature of Jerusalem, whose meaning goes beyond all considerations regarding territorial issues". (GV) (Agenzia Fides, 18/1/2018)

ASIA/ISRAEL - Jerusalem, appeal of the Greek Orthodox Patriarchate on the disputed buildings has been rejected

ASIA/HOLY LAND - The demolition of the village of Khan al Ahmar begins. Appeal of the Episcopal Justice and Peace Commission

ASIA/LEBANON - Maronite Bishops to Lebanese politicians: do not drag the country into the conflicts that are stirring the Middle East