AMERICA/CHILE - With Pope Francis "the desert of our Church flourishes" 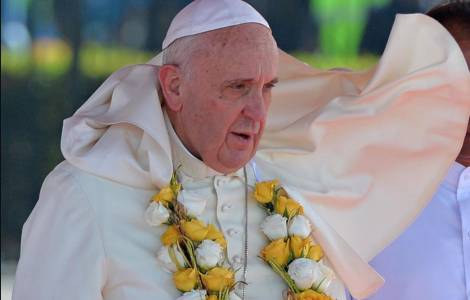 2021-10-25
Violence and polarization on the rise in view of the elections: the Bishops call for dialogue and responsibility

2021-10-21
Bishopric of Talca ransacked and burned down: "violence does not solve Chile's problems"

2021-09-27
Violence against migrants: "We cannot allow a new epidemic, this time of hatred, racism and xenophobia"

2021-09-21
In times of social change, Catholic radio stations must strengthen their commitment to building a better community, based on the Gospel

2021-09-20
The values that should be present in the new Constitution: Cardinal Aós at the Te Deum

Santiago de Chile (Agenzia Fides) - "These are intense days of great joy": this is how the Archbishop of Concepción, Fernando Chomali, describes the first days marked by the Pope's presence in Chile in an interview with Agenzia Fides. Everywhere many people greeted him on the streets. After the Mass with about 350 thousand faithful, the meeting with the female prisoners was very touching, the Archbishop observes: "He encouraged them to always look towards the objective of reintegrating into the social fabric. The Pope was moved", continues the Archbishop. Mgr. Chomali reflects on what the Pope said in the cathedral: "The message he insisted on is that we are all human beings, each with their own wounds. But, sharing the pain with people, it can acquire the meaning that Resurrection gives it. He invited us to be humble, and he advised the bishops to take the laity very seriously ("they are not our employees or laborers") and to guard against clericalism".
Francis also expressed his concern so that "pastors at the service of the people of God" are formed in the seminaries. Mgr. Chomali explains to Fides why in Chile the scandals - which took place in other places in the world with much greater proportions - have caused so much generalized "desolation" to use the Pope's expression. "Here - he notes - two things have happened: a very fast process of secularization and the scandals of the sexual abuse on behalf of priests, which have greatly affected society, generating a sense of profound recrimination towards the Church. This obliges us to do everything possible so that this never happens again, to ask for forgiveness repeatedly and to work for truth and clarity". In this regard, Paula Luengo, consecrated laywoman of an ecclesial movement, believes that the credibility of the Church has been greatly affected as one of the most striking cases was that of a well-known priest who had contributed to accompany the vocations of priests then consecrated bishops: this, she explains to Fides, has generated, in the faithful, a sense of very acute betrayal. Moreover, people have perceived a "distancing of the Church from people’s problems, far from the existential peripheries of which the Pope talks about", says the woman. "The Pope showed many gestures of tenderness, very important, towards many people he approached", concludes Mgr. Chomali: "He is giving us the example, he is giving himself completely. Of course this will strengthen us".
The celebration with the priests and consecrated was also moving, inspired by the theme of the "Calvary" of the local Church. The Pope drew from the Gospel passage a teaching starting from the path of the apostle Peter, in three significant stages: Peter and the destroyed community, Peter and the forgiven community and Peter and the transfigured community. Paula Luengo, among those present, describes this moment to Fides as "a face-to-face meeting with Francis, in an atmosphere of celebration but also of recollection". "He spoke of a generative vocation, which has the courage to risk", she recalls, looking ahead without paralyzing, "without thinking over and over again of one’s own desolation", as Francis repeated. Next to them, Fr Cristobal Fones, a Jesuit and well-known musician, sums up his impressions: "By giving us the Gospel, he makes the desert flourish in our Church". For the other Chilean priest, Fr Juan Ortiz, the Pope’s message was "very illuminating", especially when he replied "with great hope to the sorrows of the Church". (SM) (Agenzia Fides, 17/1/2018)

AFRICA/KENYA - Covid 19 pandemic: effects on the physical and mental health of religious