ASIA/MYANMAR - After 50 years, the first public Christmas Festival in Yangon 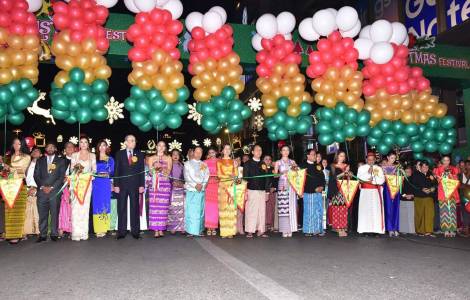 2020-11-09
Peaceful elections: towards a consolidation of the National League for Democracy

2020-10-27
Violence and tensions in Chin and Rakhine States: food emergency and elections at risk

Yangon (Agenzia Fides) - The Christian communities in Myanmar, Catholic and Protestant, have publicly celebrated Christmas in the streets of Yangon, for the first time in 50 years: as Agenzia Fides learns, in the past Christmas was strictly confined within the walls of churches, several liturgies, feasts, processions, took place in the city, especially from 23 to 25 December, with the specific authorization of the government authorities of the region of Yangon.
The Festival was inaugurated on December 23 in the Methodist Church of the Holy Trinity and ended on December 25 with a solemn liturgy in the Catholic Cathedral of Santa Maria in Yangon, in the presence of Henry Van Thio, vice president of the Republic of Myanmar. Bishop John Saw Yaw Han, Auxiliary of the Archdiocese of Yangon, declared the happiness of the Burmese Christians for this first Festival and encouraged all fellow citizens "to contribute in every possible way to the peace and prosperity of the nation". The special Christmas Festival was initiated with the consent of Phyo Min Thein, Prime Minister of the Regional Government of Yangon, and Mg Mg Soe, Mayor of Yangon, with the explicit intention of "honoring Pope Francis' visit to Myanmar held in November 2017 and to show solidarity with Christians in Myanmar and in the world".
According to Fr. George Mg Mg, these activities are a sign of the growth of religious freedom in Myanmar. Christian woman Naw Nilar San, of the Baptist Church, remarked that "in 50 years I have never experienced this kind of Christmas feast, many Christian singers sang Christmas hymns, and Christians offered food and drink to the people of Yangon, without any discrimination, bringing everyone a greeting and a wish for peace".
"This year is very significant in the history of Burma because Christians were allowed to celebrate Christmas publicly with the people of the city.This Christmas Festival in the city was intended to promote social cohesion, interreligious understanding and friendship among citizens", said Fr. Thet Tin, another local Catholic parish priest.
Catholic layman Toe Toe remarks that "Christmas means showing and giving the love of Christ for humanity". Thant Shwe, a Buddhist citizen, tells Fides that he "appreciated and enjoyed the Festival", in which he participated with his wife, "highlighting that Christmas is a celebration that has value for all men and not just Christians".
The Christmas Festival of the city of Yangon, point out Burmese Christians, will be remembered as the first major ecumenical meeting with the Buddhist people in the history of Myanmar. Phyo Min Thein, Prime Minister of the Regional Government of Yangon, has promised the population that in the coming years the Christmas Festival in Yangon will continue to be celebrated. According to the 2014 census, the entire Burmese population is 51.4 million and Christians of all confessions are, overall, 3 million. (JZ) (Agenzia Fides, 29/12/2017) 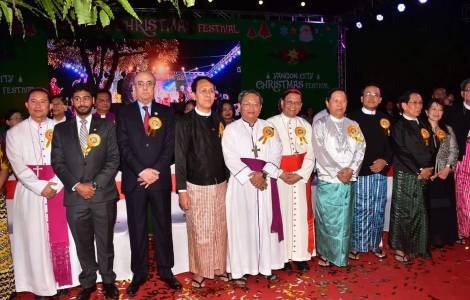 ASIA/INDONESIA - Ecumenical Message of the Bishops: God walks with us in the midst of the pandemic and in times of suffering