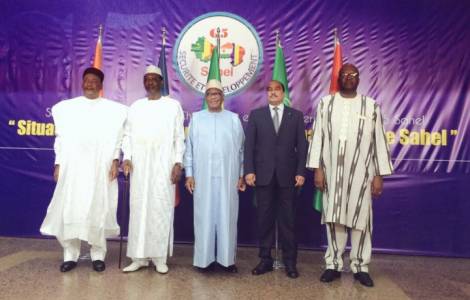 2021-02-06
The missionary kidnapped 4 years ago: "We ask the kidnappers to release Sister Gloria as soon as possible"

2021-02-04
Missionaries of the Immaculate Conception on the outskirts of Bamako: welcoming mothers in difficulty

Bamako (Agenzia Fides) - "The security situation in different areas of Mali has been a concern for several months", says Fr. Edmond Dembele, General Secretary of the Episcopal Conference of Mali, to Agenzia Fides, commenting on the achievement of the G5 Sahel agreement, a regional stabilization force of 5,000 men created with the financial support of the European Union, USA, Saudi Arabia and United Arab Emirates, and formed by soldiers from Mali, Niger, Burkina Faso, Chad and Mauritania. The future force will have its headquarters in Bamako, Mali, and will also be deployed in Niger and Burkina Faso.
Fr. Dembele illustrates the situation of insecurity in Mali that led to the creation of the new military coalition. "We had hoped that with the signing of the peace agreement of Algiers in June 2015, the conditions for the pacification and stabilization of the Country would have been created. In fact, for a few months after the signing of the agreement, we experienced a moment of relative peace. But for about a year we have witnessed a return to insecurity, especially in the center of Mali and even in the capital Bamako, where there have been attacks", says Fr. Dembele.
"There have been several terrorist attacks in the center of the Country in recent months that are becoming increasingly regular", emphasizes the priest.
"The creation of the G5 force is therefore a sign of hope not only for Mali but for the entire sub-Saharan region. In fact, Mali seems to be the epicenter of regional insecurity because most terrorist groups are based in Mali and operate from our Country to strike in Burkina Faso and Niger. The decision to focus the action of the new regional stabilization force on Mali is therefore understood", explains Fr. Dembele.
The Algiers agreement included the Tuareg separatist groups in a peace process, which were the source of the crisis that broke out in January 2012, when the north of Mali was conquered by the Tuareg rebels, giving life to the ephemeral Republic of Azawad. The separatists had almost immediately been supplanted by some jihadist groups who had begun to threaten the rest of the Country. Their advance had been stopped and then rejected by the intervention of the French and Chadian troops who had reconquered the lost territory.
"The agreement of Algiers indeed allowed to calm the independenceist aspirations of the northern regions, which are now controlled by the so-called Mixed Forces, composed of former rebels of Azawad, by soldiers of the Malian regular army, by the Blue Helmets of MINUSMA ( UN Mission in Mali) and from pro-government militias", says Fr. Dembele. "Terrorist groups are present in the north and more and more present in the center of Mali, in particular in the Ségou and Mopti areas, including the Pays Dogon area. It is in the area of Mopti that a few weeks ago several Catholic churches were attacked and for this reason as a Church we had raised an alarm (see Fides 5/10/2017)".
"These groups are linked to illegal trafficking (weapons, drugs, cigarettes, human beings) that are concentrated in the center of Mali. These are very lucrative trades and smugglers like jihadists have an interest in sowing chaos to prevent the State from controlling the area to enforce the law", concludes Fr. Dembele. (L.M.) (Agenzia Fides, 14/12/2017)

AFRICA/D.R. CONGO - State of emergency in the east: doubts and perplexities of academics and representatives of civil society

AFRICA/NIGER - Assault on the village where the first local Catholic communities were born: at least 5 dead and the desecration of the church