ASIA/HONG KONG - Half a century of mission among the lepers: Don Gaetano Nicosia, the angel of lepers 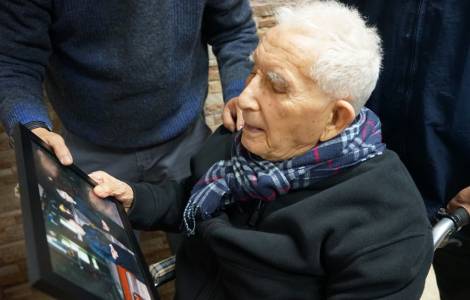 Hong Kong (Agenzia Fides) - It was August 1963 when the young Salesian missionary Don Gaetano Nicosia arrived in Ka Ho, a remote corner of the island of Coloane, Macau, to take care of a hundred patients suffering from Hansen's disease and lived there after the closure of leper colonies in China.
The situation of abandonment and isolation, including healthcare, was dramatic, characterized by frequent violence and suicide. The leper colonies could only be reached by boat, but boatmen did not want to leave their boats and the food was pulled to shore with ropes.
Don Nicosia was born on April 3, 1915 in San Giovanni La Punta, province of Catania, Italy, and in 1935 he began his mission in Hong Kong. He was ordained a priest in 1946, in the church dedicated to St. Joseph in Macau, after a first period spent in China in Guangdong Province, to his expulsion in 1950, he dedicated himself to students at the San Luigi school in Hong Kong. However, he felt strongly the desire to live the mission with the poorest, precisely with the lepers. When the Bishop of Macau asked the Salesians for help for the lepers in Coloane, Don Nicosia managed to achieve his deepest aspiration, which would lead him to be known as the "angel of lepers".
He then moved to Ka Ho and for 48 years, from 1963 to 2011, he lived with lepers, radically transforming that despair into a clean and decent center. Doctors and nurses arrived who provided proper medical care, healthy food, and the houses were renovated, the environment was also tidy and clean. Thanks to his commitment there was also drinking water and electricity. A farm and workshop was set up for the various crafts, so that each one had a job or task to carry out. A Council was also formed to discuss and make decisions regarding the small community.
Don Nicosia lived with them, assuring, in addition to dignity and well-being, the announcement of the Christian faith: when he arrived at the leper colony there were about fifteen Catholics, but little by little everyone embraced faith thanks to his testimony of life and his dedication to catechism. A school and a church dedicated to Our Lady of Sorrows was built.
In the 1970s about forty lepers were dismissed, because they were healed, but also the rest, about seventy, little by little, returned to the world. Don Nicosia helped many former sick lepers to win the stigma that still hit them. In 2011, the sick were all cured and most of them worked as teachers, employees, and professionals. Don Nicosia was not insensitive to lepers in Guangdong Province, where he collaborated with local authorities to recover sick people and children, children of lepers, offering them education and support for their future.
Don Nicosia, priest of great spirituality, was confessor and director of priests, religious men and women and lay people. He died in Hong Kong on November 6, at the age of 102. The funeral took place on November 14 in the Cathedral, before the burial in San Michele cemetery in Macao.
Over the years, many people, affected by the faith and affection of Don Nicosia, who received honors and awards for his work from the government of Macao and the Presidency of the Italian Republic, supported him in the work of good that he did everywhere. A documentary in 2015 was dedicated to him: "Don Gaetano Nicosia, the Angel of the Lepers". (SL) (Agenzia Fides, 17/11/2017)