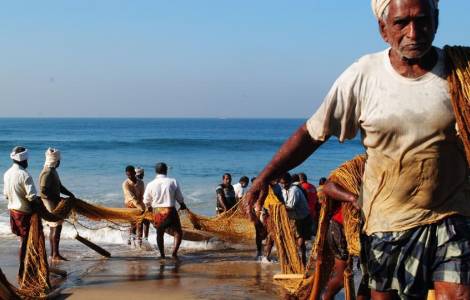 Kaohsiung City (Fides Service) - The XXIV World Congress of the Apostleship of the Sea (AoS), on the theme: 'Caught in the net' is being held in Kaohsiung City until October 7. The chosen theme expresses the concern of the Church not only for the common good but also for the people as human beings and their fundamental rights. Cardinal Peter Turkson, the Prefect of the Dicastery for Promoting Integral Human Development at the Vatican, under which AoS’ ministry falls, said "the pastoral care of fishermen is part of the daily work of many AoS chaplains and volunteers who, along with spiritual and material assistance to seafarers, provide support to fishermen and their families".
At the opening of the Congress, the Vice President of the Republic of China (Taiwan), Chen Chien-jen, expressed appreciation on behalf of the Government of Taiwan for the work of AoS, in particular because often seafarers and fishermen are recruited by the developing countries that have no means to protect their rights. Cardinal Turkson noted that 38 million people were engaged in fisheries, 90% of whom were working in small scale fisheries, largely located in Asia and Africa. "Abuses are still present including cases of forced labour and human trafficking in the fishing industry. The problem is worsened due to the practice of some fishing vessels being at sea for months or years, making it difficult for fishermen to report abuses", said the Cardinal. "The work of this Congress is essential, he added, both to better understand the lives of those who depend on the sea but also to see how they can benefit from the evangelising work of the Apostleship of the Sea". Cardinal Turkson proposed that in AoS’s future work to support fishermen that they encourage bishops of countries without AoS chaplains to establish an outreach. He also encouraged the AoS to encourage their home countries to implement the UN’s International Labour Organisation’s Work in Fishing Convention. The Cardinal underlined the need for fishermen to have the friendship of the chaplain or volunteer, to have a place to relax away from their vessel, a place to pray and regain their spiritual strength, to be given the chance to contact their families, to rest, to unload their burdens.
"Among the participants there is also a delegation from India, consisting of 7 priests and the Bishop of Jaipur, Mgr. Oswal Joseph Lewis", said to Fides father Ramses Baliarsingh, delegate of Paradip Harbor in Odisha. "In India there are 12 ports. 252 participants from 52 countries have confirmed their attendance at the gathering. It is a great opportunity for me to take part in the World Congress which will surely give me a better understanding of how to work for the well-being of migrants, refugees and seafarers", he continues. "90% of world trade is carried out by ship and every year more than 100,000 ships enter British ports. However, the life of seafarers can be full of dangers and loneliness. They can spend a year away from home, separated from family and loved ones, often in difficult conditions. The delegate of the Environmental Justice Foundation spoke of the shocking effects of illegal fishing on fishermen, those who work without contracts, those who do not feel free to leave their boats, cases of sexual abuse and violence, and executions at sea. He also praised Aos’ commitment in ports around the world that provides justice to seafarers who suffer abuse", concludes Father Ramses. (RB/AP) (Agenzia Fides, 5/10/2017)