ASIA/INDIA - "The Church is committed to the development of the Dalits more than the Government", while violence increases 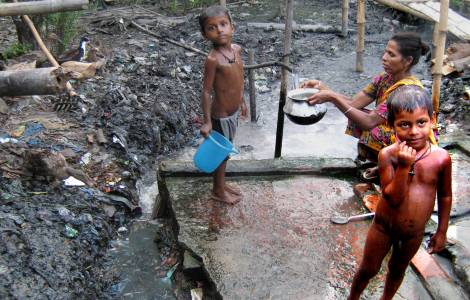 New Delhi (Agenzia Fides) - Violence against Dalits (the "outcasts" or "untouchables") in India have increased in recent years: say the official data of the National Crime Record Board (NCRB), illustrated in recent days in a public meeting in Delhi which was attended by more than 7000 Dalits from all over the country, promoted by the "Bharatiya Khet Mazdoor Union Federation" (BKMUF), a network that links different organizations of Indian Dalits.
"It is a matter of concern to note: since the Bharatiya Janata Party of Prime Minister Narendra Modi have been ruling, atrocities on Dalits have increased" says to Fides Jesuit A. Xavier John Bosco, director of the Jesuit Social Centre, based in Secunderabad (Andhra Pradesh), one of the speakers at the event in Delhi, attended by many Christian groups. "It is urgent to carry out a massive campaign across the country on the delicate question of the Dalits", asks Fr. Bosco.
Interviewed by Agenzia Fides, Bishop Theodore Mascarenhas, General Secretary of the Indian Bishops' Conference, said: "The Church has always given attention to Dalits and tribals, the government has not given the Dalits the attention that the Church has given them, in the field of education, social welfare, development and promotion. There is a special Commission of Bishops in charge of their social development and the fight against discrimination. Of course, one must counter a widespread mentality which discriminates against them. We also ask Christian Dalits, penalized by the Presidential Ordinance of 1950, to have the same rights enjoyed by non Christian Dalits".
According to data released, in 2015 the states which registered a higher rate of violence, including murder and rape regarding Dalit women are: Gujarat (6,655 cases), Chhattisgarh (3,008 cases) and Rajasthan (7,144 cases).
Dalits are often victims of arbitrary and unlawful expropriation of the most fertile lands. According to the results of the socio-economic census of 2011, this occurred in nearly 73% of dalit families living in rural areas. About 45% percent of Dalits and tribal families are landless or deprived of an important part of their income for sustenance. These inequalities generate poverty, malnutrition, ill health, illiteracy and low human development indicators.
During the event in Delhi, the participants asked the government to take effective measures to limit the atrocities on Dalits in India. Among other demands raised: the need to outlaw violent groups attacking Dalits; provide work and employment contracts; distribute land to all landless; implement laws against discrimination in schools. (PA-SD) (Agenzia Fides 22/09/2016)