AFRICA/LIBYA - Coadjutor of Tripoli: "Migrants have a distorted vision of Europe instilled by traffickers" 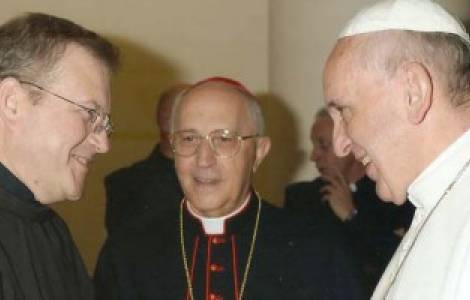 2019-11-30
Father Zerai's appeal: "An international plan to save African immigrants from detention centers"

2017-10-07
Libyan authorities confirm: the bodies of the 21 Coptic martyrs have been found

2017-09-29
Libyan Prosecutor: we know where the Coptic martyrs are buried, slaughtered by jihadists

2016-09-15
Coadjutor of Tripoli: "Migrants have a distorted vision of Europe instilled by traffickers"

Tripoli (Agenzia Fides) - "The situation in Tripoli is generally calm but occasionally clashes break out among the various militias that have divided the control of the city. These things do not happen often; skirmishes break out when men of a militia try to enter the territory controlled by another. Under these conditions we have to move very carefully", says to Agenzia Fides His Exc. Mgr. George Bugeja, Coadjutor of the Apostolic Vicar of Tripoli, who is in Rome for the Study Seminar for recently appointed Bishops in mission territories organized by Congregation for the Evangelization of Peoples (see Fides 02/09/2016).
Today, Martin Kobler, head of the UN mission in Libya, launched an alarm regarding the presence in Libya of 235,000 migrants who are waiting to find a way to go to Italy. A problem that Mgr. Bugeja knows very well.
"Several migrants come to us for assistance even spiritual, because among them there are several Christians" he says. "They come from Nigeria, Niger, some from Burundi, Sierra Leone and in general from sub-Saharan Africa. Migrants enter Libya through the southern city of Sebha and then go to Tripoli, most of them with the intention to cross the Mediterranean to travel to Italy and the rest of Europe. Those who come to me ask for blessings for the Mediterranean crossing. I try to dissuade them from running this risk, especially when there are children. But they are determined to continue the journey at all costs. They say: 'Here we do not have a future. Maybe we will find it in Europe, if not for us, for our children'. Unfortunately there are now hundreds of thousands of people who reason this way, and the only answer I can think of to try to block these flows is to ensure that Europe and the United States will help the countries from which these migrants leave to improve their social and economic conditions", said Mgr. Bugeja.
The Coadjutor of the Apostolic Vicar of Tripoli stresses that "most of the migrants have a largely distorted perception of Europe, because traffickers promise them that they will find work, will make a home, and so on, just to rob them of their savings. To travel from their country to Sebha, and then from there to Tripoli, large sums in US dollars are paid. Then to embark on the boats to Europe, traffickers ask minimum one thousand US dollars per person".
To raise money for the long journey from a sub-Saharan country to Europe, migrants usually proceed in stages, says Mgr. Bugeja. "Migrants pay the first part of the route to Libya with the money collected in the Country from where they left. Once in Tripoli, if they have no more money, they do jobs to scrape together the money in order to embark. Many of them end up in the circle of informal or criminal economy. Girls in particular end up becoming prostitutes"
Mgr. Bugeja finally explains that "the Catholic community in Tripoli is composed of the Philippines, about three thousand, who work in health facilities, and Africans. In this case it is necessary to distinguish between those who were in Libya before 2011, the year of the fall of Gaddafi, who have a job, and the others, who just pass by. Finally, there are some Indians, Pakistanis, Egyptians, and even some Europeans". (L.M.) (Agenzia Fides 15/09/2016)