ASIA/INDONESIA - Indian Jesuit Father has been living in Sumatra for 50 years: a life marked by devotion to Mary and love of God 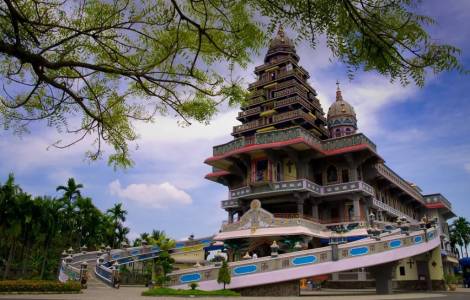 Medan (Agenzia Fides) - On the Indonesian island of Sumatra, inhabited mainly by indigenous groups and where traditionalist Islam is widespread, there lives a missionary who has become a well-known and respected personality in Medan, the capital of the province of North Sumatra: he is Indian Jesuit Father James Bharataputra, who is known for the construction of the Marian shrine "Graha Maria Annai Velangkanni" in Medan.
84-year-old Father James from the Indian state of Tamil Nadu has been active in Medan for 50 years. He was naturalized as an Indonesian in 1989. Ever since he entered the Jesuit order in the Indian province of Madurai, he had the desire to become a missionary. After a stopover in Hong Kong, he was sent to Yogyakarta, Indonesia, to complete his theological studies there. After his ordination in 1970, he had the opportunity to visit Medan and the then Archbishop Van den Hurk of Medan (OFMCap) asked him to provide pastoral care to a small local Tamil-speaking Catholic community.
"So in 1972 I began the pastoral work in Medan, which continues to this day," affirms Father James. During his 50 years in Sumatra, he also served in the province of Aceh in the island's far north (then part of the Archdiocese of Medan), which he was forced to leave due to a series of outbreaks of violence that shook the only Indonesian province that adopted parts of the "sharia" Islamic law.
In the Indonesian Church, Father James is known as the founder, initiator and still Rector of the Marian Shrine "Graha Maria Annai Velangkanni" in Medan. "I am still amazed at how God's loving providence led me to this mission land. And I am just as amazed at the great trust placed in me by my Jesuit superiors. It was they who allowed me to serve in the local Church, the Archdiocese of Medan," he says.
The shrine was the culmination of his missionary journey: realizing that the population of Medan lacked adequate education, the priest first started an educational project and rebuilt a primary school called "Karya Dharma" ("Works of Charity") to give children from economically disadvantaged families a chance for education.
"People appreciated the initiative and were very cooperative," he reports.
But there were obstacles along the way: a project designed to promote the self-sufficiency of development and subsistence for a Tamil community still living on the charity of Dutch missionaries was met with hostility from the local community. He deeply regretted this: "My actual vocation and my life as a missionary were threatened. But the Lord saved me," he recalls.
The miracle finally came about through the intercession of the Mother of God: "I had a vision to spread the devotion of Mary here as she had shown herself in Vailankanni in Tamil Nadu for more than three centuries, attracting people from all walks of life and helping them to know her son Jesus. I reflected that a shrine would attract many pilgrims from all walks of life and help them to encounter God. At the same time, a shrine reminds pilgrims that they are all children of the one God. It teaches them to respect and love one another as brothers and sisters because they are all children of the same Heavenly Father".
With this idea in his heart, the missionary began the project, supported by the archdiocese, to build a Marian shrine. "The generosity of thousands of donors was impressive. In the five years it took to build (2000-2005), the cost ended up exceeding four billion rupees (about US$500,000)."
The former Archbishop of Medan, Alfredo Gonti Pius Batubara (OFMCap), admits that "Father James brought his life and spiritual energy and work to our archdiocese. And we thank him for the erection of the Marian Shrine Graha Maria Annai Velangkanni in Medan".
Writer and confrere Father Ignatius Jesudasan, writes: "The Marian Shrine is the culmination of Father James' missionary work in Indonesia. The architectural design reflects the contemplation of Saint Ignatius in his Spiritual Exercises on the Mystery of the Incarnation. Here, as in medieval cathedrals, artistically represented by paintings and statues. The shrine combines pastoral use as a community hall, on the basement floor; worship and adoration on the middle floor; and artistic contemplation of historical-religious mysteries on the top floor. As the shrine attracts pilgrims of all faiths, the work contributes to Indonesia's religious-cultural diversity and tourism. This place has become a blessing for many people." And the Indonesian Jesuit Fr. Sindhunata writes: "The shrine is a place where heaven and earth meet, where the divine and the human embrace, where God meets His people, regardless of ethnicity, creed or language". (PA/MH) (Agenzia Fides, 25/1/2023) 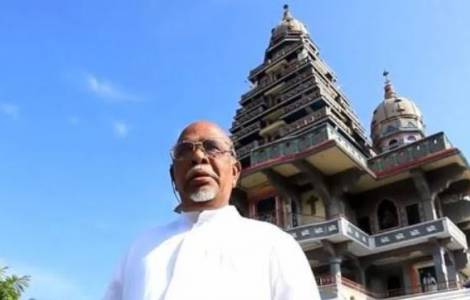