AFRICA/DR CONGO - "Bible and machete". "ora et labora" of the catechists of the diocese of Lolo 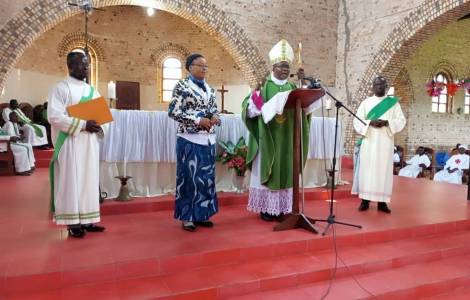 Rome (Agenzia Fides) - "We await with joy the visit of Pope Francis in the Democratic Republic of Congo. In all the churches the prayer composed for this occasion is recited", says to Fides Msgr. Jean-Bertin Nadonye Ndongo, Bishop of Lolo who is in Rome where tomorrow, January 22, he will participate in the celebration, presided over by the Holy Father, of the fourth Sunday of the Word of God in St. Peter's.
During the celebration, the ministries of Lector and Catechist will be conferred on lay women and men, in particular three people will receive the ministry of Lector and seven that of Catechist. They are lay faithful who intend to represent the People of God, and come from Italy, the Democratic Republic of Congo, the Philippines, Mexico and Wales.
Msgr. Ndongo explains how his invitation to the diocese came about. "The Dicastery for the New Evangelization saw an article where we described our formation school for catechists and he thus invited me to present it at the third international congress of catechists in Rome. Again the same Dicastery informed me that Pope Francis was inviting me and two catechists to the Sunday celebration of the Word of God".
The "Mobokoli" Catechetical, Pastoral and Ecological Formation Center of the Diocese of Lolo began operating in the 2018-2019 academic year. To understand its importance, one must bear in mind that the diocese of Lolo is located in the equatorial forest in the northwest of the Democratic Republic of the Congo, where over 93 percent of the population lives in absolute poverty. There are about 200,000 inhabitants, scattered over 293 villages, even isolated from each other, over an area of 10,000 square kilometres. "There are 317 catechists serving 10 parishes. A single parish can include about thirty villages scattered over a very vast territory. A year can even pass between one visit and another by the parish priest in the same village. And it is the catechists who lead the community of faithful, presiding over the Sunday celebration of the Word", says Msgr. Ndongo.
"When I became Bishop of the diocese of Lolo I realized, in my pastoral meetings, the need for a better formation of catechists, also in relation to relations with other Christian denominations", explains the Bishop. "One of the most frequently asked questions was, for example, "why are you Catholics baptized at an early age and not as adults?". We therefore decided to create a school that ensures a solid formation for our catechists".
We started building the Center in 2017", recalls Msgr. Ndongo. "We started building 10 houses with materials found on site. One for each parish. When friends from Missio Aachen came to visit us they helped us rebuild the buildings with better materials. Within 3 years we obtained 10 homes to accommodate students. In addition, the director's house and the school divided into three classrooms, two for women and one for men, were built".
Msgr. Ndongo underlines the importance of the formation given to women, who are often illiterate: "Women, married to a catechist who is in turn undergoing formation, receive two distinct formations. In addition to the catechetical one, there is also one of human development focused on literacy, sewing and family management courses. So when they return to the village, catechist couples, husband and wife, become not only a point of reference for Catholics, but also agents of human development for all the inhabitants, especially for women". "The formation of men, in addition to the theological and moral part, includes a so-called "civil" part (for example on human and civic rights), a practical part on how, for example, to impart Christian teachings to those who ask to join the Catholic Church. Finally, a part dedicated to human development, focused on cultivation and breeding. It is no coincidence that the symbol of the school is an open Bible with a machete next to it, a work tool for harvesting the fruits of the earth. In short, we refer to the Ora et Labora rule", concludes the Bishop. (L.M.) (Agenzia Fides, 21/1/2023)

ASIA/SOUTH KOREA - Mission with the deaf, thanks to sign language videos