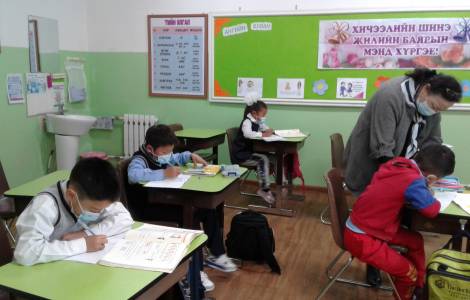 2022-07-01
Msgr. Marengo: "Accompany the faithful on their journey with the light of the Gospel"

2022-05-30
The Apostolic Prefect Marengo, appointed Cardinal: "That of the Pope is a missionary gesture"

2021-10-20
The Apostolic Prefect: mission is nourished with the depth of faith

Zuunmod (Agenzia Fides) - This year, 30 children are attending the "St Paul" school, run by the Daughters of Mary Help of Christians, in the Mongolian village of Zuunmod, capital of the province of Tov. A school that is a significant presence in a context where most of the children come from families whose daily life is marked by strong social difficulties.
In Zuunmod, work is a mirage. There are very few stable employment opportunities. Families live on subsidies that the government distributes each month to support children from 0 to 18 years old (about 100 million tugrik, the Mongolian currency, corresponding to 313 euros).
“There are, among adults, those who abuse alcohol using the money intended for their children. In some cases they lack the necessary things, even the ability to wash themselves", Sister Hanako Kojima Teresia, director of the school who this year received support from the Pontifical Society of the Holy Childhood, told Fides.
The children arrive in the morning, have breakfast and begin their school and play activities. The day continues with lunch and, for some, after school, which is also open to the children of the village who do not attend school. The after school program also helps children to do some extracurricular activities.
“The first sisters of our Congregation arrived in Mongolia in 2006,” says Sister Hanako Kojima Teresia, “and the first community was formed on December 8, 2007 with four of us. After studying the Mongolian language and adapting to the environment, we began educational activities in the kindergarten and primary school entrusted to us by the local Church." The official religion of the country is Tibetan Buddhism. No religious activities are held at school. The sisters do not wear the habit of their congregation.
“We - says the director of the school - are inspired by Don Bosco's 'Preventive System', educating boys and girls to become honest citizens". According to St. John Bosco, boys and girls immersed in contexts of social and family difficulties can grow in a healthy way thanks to the closeness and support of affectionate guides and educators, who know how to guide them in their choices, giving concrete faith to the reasonableness of virtuous behaviours, rather than focusing on 'repressive' punishments and practices against those who break the rules.
The daily accompaniment of the Daughters of Mary Help of Christians becomes even more silent and prayerful when there are situations of serious psychological and emotional deprivation. Sister Hanako Kojima Teresia recalls the case of a girl with an alcoholic father who, despite suffering all the negative consequences of a complex and difficult situation at that age, tried to maintain a protective attitude towards her parent. "Before this - concludes the nun - I was deeply moved and I prayed for her and for her future". (EG) (Agenzia Fides, 9/12/2022)