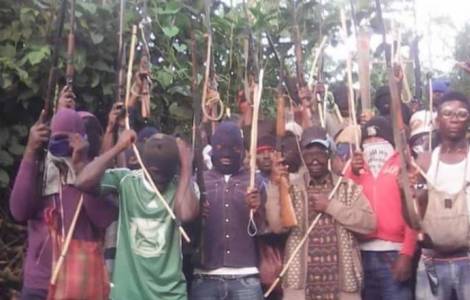 2022-12-07
Three people detained in the US accused of financing separatist activities, including the kidnapping of Cardinal Tumi

2022-10-20
Video of the hostages captured in the church of Nchang: "Do everything to free us as soon as possible"

2022-10-05
Spokesman of the Bishops' Conference: "The separatist conflict has now become a question of money"

Yaoundé (Agenzia Fides) - The separatist conflict between the two English-speaking regions of Cameroon has an international dimension that has not yet been fully revealed. Last week, the US Department of Justice arrested three US citizens of Cameroonian origin on charges of raising $350,000 to purchase weapons and bomb-making materials for the Ambazonian Restoration Forces.
According to the Washington authorities, the funds collected were also used to finance various kidnappings, including that of Cardinal Christian Tumi, archbishop emeritus of Douala, kidnapped on November 5, 2020 and released after a brief detention (see Fides 6 and 7/11/2020).
Cardinal Tumi, who died in 2021, had tried on several occasions to mediate between the government and the separatists.
The Justice Department reported that Claude Chi, 40, a resident of Lee's Summit, Missouri; Francis Chenyi, 49, a resident of St. Paul, Minnesota; and Lah Nestor Langmi, 46, a resident of Buffalo, New York, were arrested on charges of conspiracy to provide material support for kidnapping and use of weapons of mass destruction in a foreign country.
"In addition to the more than $350,000 raised by the defendants through voluntary donations, the prosecution alleges that Chi, Chenyi and Langmi conspired with others to kidnap civilians in Cameroon for ransom", the Justice Department statement said. "In some cases, US citizens were extorted for ransom to secure the release of family members kidnapped in Cameroon". The ransom payments were then passed on to separatist fighters to finance their operations. Fundraising for separatists had been going on since 2018.
The crisis in the two English-speaking regions of Cameroon erupted in 2016 when the demands of the inhabitants to use English in teaching and administrative activities, and to adopt the British Common Law system instead of the law based on the French code. On October 1, 2017, the independence of what was called Ambazonia was symbolically declared. In addition to armed groups such as the Ambazonian Restoration Forces, the separatists created a central bank, the Bank of Ambazonia, which on December 5 announced the holding of a conference on March 18, 2023 to discuss "the opportunities, challenges, and prospects" of the national currency "Amba". The statement states that "the new state of Ambazonia will not be part of the CFA free zone (the currency adopted by 14 former French colonial states)", like Cameroon. (L.M.) (Agenzia Fides, 7/12/2022)

AFRICA/DR CONGO - "The spotlight on cobalt is good, but we must also look at other Congolese minerals".