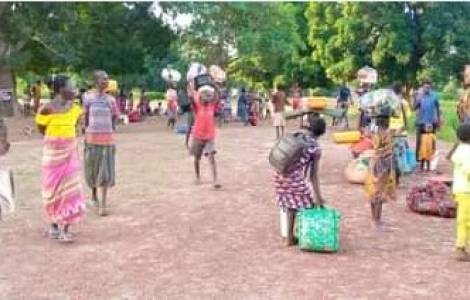 2022-12-13
Overcoming Ethnic Conflicts: Education as an Instrument of Peace

Tombura Yambio (Agenzia Fides) - "The announcement of the Holy Father's visit is an answer to our prayer. The entire population of Sudan and South Sudan awaits the the Successor of Peter to come and step on the soil of our country." The Bishop of Tombura Yambio, South Sudan, Eduardo Hiiboro Kussala, reached by telephone by Agenzia Fides, commented on the imminent visit to the country, scheduled from 3 to 5 February, that Pope Francis will carry out together with the Anglican Archbishop of Canterbury Justin Welby, Primate of the Anglican Communion, and Pastor Iain Greenshields, Moderator of the General Assembly of the Church of Scotland. The prelate highlighted the importance of this ecumenical pilgrimage in the name of peace. "The coming of the Pope wants to be a moment to strengthen our faith, to feel that we are a single people guided by their pastor, the Pope. The fact that it is a visit marked by ecumenism, together with leaders of other churches, underlines the importance of wanting a united South Sudan, with all ethnic groups, communities and religious beliefs in harmony. It is a true call for unity and coexistence". Kussala considers this visit "a gesture whose main objective is to invoke and promote peace in our hearts above all, peace among us, peace for all the peoples of the world who are at war".
The 'youngest country in the world', which had achieved independence from Sudan in 2011 after half a century of battles (see Fides, 8/2/2011), has never known peace. In fact, since 2013, the population has been devastated by an endless civil and ethnic war, despite a peace agreement signed in 2018 and never respected (see Fides, 6/7/2018). "I would like to contribute to this peace process, not on my own, but by making an ecumenical pilgrimage together with two dear brothers, the Archbishop of Canterbury and the moderator of the General Assembly of the Church of Scotland", Pope Francis had said, according to a statement from the Department for the Promotion of Christian Unity on December 1st.
"We will all pray together for peace in South Sudan, but also for peace in Ukraine and in all areas of the planet involved in conflicts", concluded Bishop Kussala.
To date, more than 2.3 million South Sudanese have been forced to flee to neighboring states, mainly Uganda, but also Sudan and Ethiopia. More than 2 million people are internally displaced. "Both the government forces of South Sudan and rebel forces are using hunger as a deliberate tactic to push civilians to flee", reads a note published by the Global Rights Compliance Foundation, an NGO specialized in international law and in the defense of human rights. It is estimated that more than 8 million South Sudanese, out of a total of 11 million, are facing a situation of severe food insecurity. (AP) (Agenzia Fides, 7/12/2022)