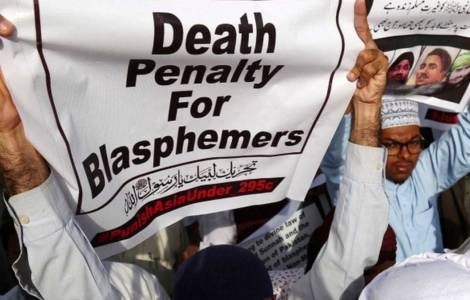 Peshawar (Agenzia Fides) - An anti-terrorism court in Peshawar has sentenced Sana Ullah, a Pakistani citizen living in the northern province of Khyber Pakhtunkhwa, to death for committing blasphemy on social media. The court sentenced him to 21 years in prison and a fine of 1.6 million rupees at the same time. While the fine and jail sentence will be immediately enforceable, the death sentence will need to be upheld by the Peshawar High Court.
According to the verdict, handed down on December 1, all witnesses for the prosecution agree, while the Sim card of the mobile phone in his name contained several blasphemous contents, shared by the man in a group on the "What'sApp" chat. The complaint against the man was filed on August 4, 2021 and the defendant's arrest took place the following day, pursuant to articles 295-a (insult to religious beliefs), 295-C (derogatory remarks against the Prophet Mohammed) and 298-a (insult to sacred figures) of the Penal Code, and pursuant to article 20 of the Law on the prevention of electronic crimes (offense to the dignity of the person), as well as in violation of article 7 (1 ) of the Anti-Terrorism Law.
According to information gathered by Fides from civil society organizations and communities, Pakistan is witnessing a crackdown on the crime of blasphemy on social media, slavishly applying the existing severe criminal legislation. Islamic organizations are using all legal channels to control what they see as "a growing threat of spreading blasphemous content on social media". The Cyber Crime Wing of the Federal Investigation Agency (FIA) has been called upon to monitor and prosecute those who spread blasphemous content on the web. Blasphemy Legal Commission Secretary General Sheraz Ahmed Farooqui has confirmed that the FIA is working to identify and stop the publication of blasphemous content on social media and that 62 people have been taken into custody for such offences.
A consortium of religious, social and legal organizations (such as Namoos-e-Risalat Lawyers Forum Pakistan, Legal Thinkers Forum, Tehreek Tehfuz Namoos-e-Risalat Pakistan, World Khatm-e-Nabuwat Council, Anjuman Ashqaan-e-Muhammad, Tehfuz Khatm-e-Nabuwat Forum, Tehfuz Khatm-e-Nabuwat Wukla Forum, Legal and Cyber Experts Forum, Razakaran-e-Khatm-e-Nabuwat and Islamabad Bar Association) deals of these cases and calls for the utmost severity to be applied to those who commit blasphemy on social media. This Islamic religious group Tehreek-e-Labbaik Pakistan (TLP), which opposes any changes to blasphemy laws and has gained a strong following over the past 15 years, shares this approach.
As part of this, the Ministry of Religious Affairs and Interreligious Harmony has also reactivated a special web-based assessment group to monitor incidents of blasphemy detected on social media and then report them to the police.
According to critics of the so-called "blasphemy" law (three articles of the penal code punishing insults to Islam in particular), many people, in particular members of religious minorities, are unfairly denounced and the law
is used improperly as a tool of revenge in private disputes. It should be noted that a number of the accused persons may commit an alleged "act of blasphemy" without wanting to (this is for example the case of certain people who burn a sheet of newspaper on which passages from the Koran appear, editor's note) or that they have mental health issues, and are disproportionately targeted, without being fully aware of their actions.
Among the cases marred by a lack of credible evidence and other irregularities - as noted by the organization "Christian Solidarity International" - are those currently pending before the courts, concerning at least 10 Pakistani citizens accused of blasphemy , both Christians (Salamat Mansha Masih, Stephen Masih, Raja Aziz Waris Masih, Noman Masih) and Muslims (Sarfraz Ahmad, M. Tayyab, Haider Ali, Mohammad Shahid, Shagufta Kiran, Sunny Waqas). The case of Imran Rehman, a 32-year-old Christian father of two daughters, who was arrested in September 2022 and is now in jail in Lahore, accused of posting blasphemous material on a "What'sApp" chat group. ", is recent.
According to the Center for Research and Security Studies, based in Islamabad, 1,415 people were accused of blasphemy in Pakistan between 1947 and 2021. Of these, 81 of them were extrajudicially killed. (PA) (Agenzia Fides, 2/12/2022)