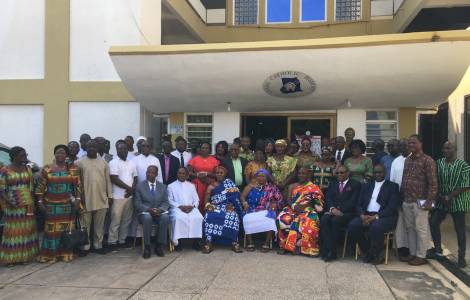 2023-01-26
Resignation and appointment of bishop of Wiawso

2022-12-02
Ghana, so far spared from jihadist attacks, questions the threat of terrorism in the region

2022-10-17
Exploitation and environmental damage: “We must fight the problem of illegal gold diggers together”

Accra (Agenzia Fides) - "Dialogue has the potential to be a continuous stimulus for a greater understanding of the truth", said Fr. Lazarus Anondee, Secretary General of the Catholic Bishops' Conference of Ghana (GCBC), on the occasion of the National Forum on Trending Conflict Issues (Sahel Peace Initiative), held in Accra. The forum, organized by the GCBC in collaboration with Catholic Relief Services (CRS), brought together key stakeholders in the country interested in finding ways to protect the country from violent extremism and terrorism.
Members of the Ghana Armed Forces, Prison Service, Immigration Service, Ghana Christian Council, political parties and traditional leaders among others attended the event.
Fr. Anondee said the Central Sahel region of West Africa is currently experiencing an increase in violence and extremism, due to weakening national institutions and dwindling natural resources.
This in turn leads, Fr. Anondee pointed out, to the migration of millions in search of safety, both within and outside the region.
The Secretary General of the Episcopal Conference therefore urged participants to work with local communities and civil society, including religious leaders, to restore trust in local and national state institutions and revive civic participation.
During his speech, Colonel Dr. Tim Ba-Taa-Banah, Director of the National Counter Terrorism Fusion Center of the Ministry of National Security, said that although Ghana has not yet recorded any direct terrorist attacks, it is not immune to such attacks. He therefore urged Ghanaians to remain vigilant and report any suspicious acts to security agencies.
It should be noted that an Accra Initiative meeting was held in the capital city of Ghana in the second half of November. The Initiative launched in 2017 aims to coordinate regional efforts to address the growing threat of jihadist violence, which affects Mali, Burkina Faso and Niger and could spread to coastal states such as Toga and Benin which have already recorded some terrorist attacks.
The presidents of Benin, Togo, Ghana, Côte d'Ivoire and Burkina Faso, as well as the leaders of Niger and Mali, met in Accra with representatives of the European Union, Great Britain and from France.
In recent months, the Initiative has taken on greater importance due to the increase in attacks in Benin and Togo, but also due to growing interest from Western partners who are trying to redefine their strategy in the region.
Deteriorating security in the Sahel "threatens to engulf the entire West African region", Ghanaian President Nana Akufo-Addo warned at the opening of the meeting. (L.M.) (Agenzia Fides, 2/12/2022)