EUROPE/RUSSIA - Feed the hungry. Sprouts of Franciscan mercy in the freezing Russian winter 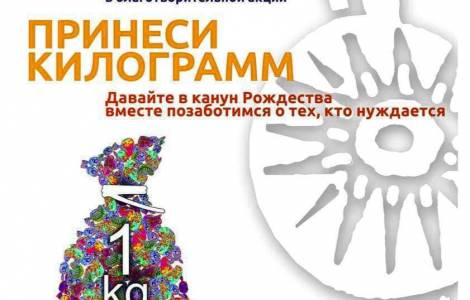 Moscow (Agenzia Fides) - "Bring a kilo". In Russian, “Prinesi kilogramm”. This is the name again this year of the food collection promoted in Moscow by the Conventual Franciscans to help people who live in need in the capital and beyond.
Finding food for the needy is becoming a frequent regular commitment for the Conventual Franciscans in Moscow, which takes place at least twice a year, before Christmas and before Easter. Also this year, the pre-Christmas campaign began on November 28, the day after the first Sunday of Advent.
The "Prinesi kilogramm" initiative has been taking place for nine years, twice a year, and continues until Christmas. Those who join the collection are invited to bring at least 1 kg of long-life food to the Convent of the Friars Minor Conventual in Moscow. Part of the food collected remains in the capital, while the rest is sent to Kaluga, a city about 200 km south of Moscow, where there is another Franciscan convent.
The campaign was not born out of abstract and indefinite good humanitarian intentions.
"We saw people in constant difficulty, both among those who come to our convent and outside the community", says to Fides friar Piotr Karnialiuk OFM Conv, friar-guardian of the convent of St. Francis in Moscow and Secretary of the General Custody of Russia. "So - he adds - we started organizing collections of long-life foodstuffs twice a year, around Easter and Christmas, and spreading the news by word of mouth through social media", continues Friar Piotr. People from the capital and neighboring cities come to the convent. They bring packages of rice, durum wheat pasta and canned goods as gifts. At the end of the harvest period, the stored food is distributed to those who come to the door of the convents in Moscow or Kaluga and ask for something to eat. "Thus, by helping those in need with the most basic needs, we too experience the miracle of gratuitousness and take steps on the path of charity", comments the guardian father.
The recent history of the Order in Russia and Kazakhstan began after the fall of the USSR, when in 1993 the Friars Minor Conventual were called to those lands by Msgr. Tadeusz Kondrusiewicz, then Apostolic Administrator of European Russia. Initially, the friars depended on some Polish provinces of the order and, in 2001, the Russian General Custody of St. Francis of Assisi (Rossijskaja General'naja Kustodija sv. Franciska Assizskogo) was born, which since 2019 also includes Kazakhstan. Currently, it comprises six convents (in Moscow, St. Petersburg, Chernyakhovsk, Kaluga, Astrachan' and Nur-Sultan, in Kazakhstan), where sixteen friars from Lithuania, Slovenia, Poland, Belarus, Italy and Kazakhstan live. They are joined by three young men in formation, one of whom is of Russian origin and one of Kazakh origin. Along with various charitable initiatives, the Franciscans also carry out activities in the cultural field, thanks to the Franciscan Publishing House (Izdatel'stvo Franciskancev), founded in 1994, which has translated numerous pontifical documents and theological texts into Russian. Last June, the Sixth General Chapter re-elected Friar Dariusz Harasimowicz OFM Conv, a missionary in Russia for more than twenty-six years, as General Custos. (CD) (Agenzia Fides, 2/12/2022)