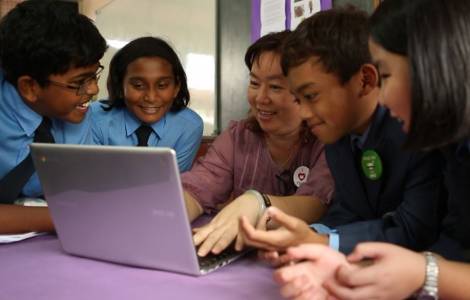 Kota Kinabalu (Agenzia Fides) - "The way in which teachers continue to transmit knowledge using all means, even the mass media, and the perseverance they show in continuing to serve children in difficult times is admirable". What John Wong Soo Kau, Archbishop of Kota Kinabalu, said to the teachers of the St. Francis Convent Primary School, thanking them "for their commitment, generosity and above all for their love towards the school and the pupils, whom you consider as your children", reflects the approach of the educational service rendered by Catholic structures in the nation, to students without distinction of ethnicity, culture, religion.
In particular, the St. Francis Convent Primary School has achieved exceptional results at the state level, obtaining a prestigious national award, for the competence of the students and for the educational projects undertaken. Among the various projects, the school has inaugurated a group called "MyCommunity In Action", with the aim of improving the relationship, respect and trust between teachers and students, as well as between teachers and parents, which has created a very supportive environment to learning and collaboration. In particular, "the time and effort offered by teachers is difficult to quantify or monetize and all our gratitude goes to them", said Dora Lai, the school's headmistress.
Catholic schools in Malaysia have been known for their educational contribution to the country since they were first established in 1852 by the De La Salle Brothers and Sisters of the Child Jesus in Peninsular Malaysia.
In East Malaysia (the provinces on the island of Borneo) the educational work was instead started by the Fathers of Mill Hill who founded their first school in Sarawak and Sabah in 1881. Since then, other religious congregations have also dedicated themselves to the apostolate of education and soon there was a network of Catholic schools throughout the country. Before Malaysia's independence in 1957, there were four different independent middle schools by language: English, Malay, Chinese and Tamil. With independence and the new national education policy plan, children of different ethnicities and cultures were brought together in a unified education system, making Bahasha Malaysia the national language and the main means of education in all schools.
In this system, Catholic schools were classified as "private schools with special agreements" and received subsidies from the government to cover management costs and teachers' salaries, while maintaining a certain administrative and teaching autonomy. Due to the popularity of Catholic schools and large enrollment demands, the institutes then came under tighter administrative and managerial control by the state, with directors and headmasters appointed by the Ministry of Education: which effectively deprived the religious congregations of the authority and control over the institutes they founded.
Catholic schools have gone through a transitional period in their history. Bishops of religious orders have actively sought to discern the Church's future role in Catholic education: this led to the creation of the Malaysian Catholic Education Council (MCEC). The Council studied a specific educational program that followed the national educational agenda, integrating it with subjects and programs suitable for "holistic" education, which could "involve the mind, heart and strength". The mind in terms of academic knowledge; the heart in terms of values; strengths in terms of skills. Furthermore, the aim remains to make education accessible to average-income families and to provide equal opportunities for those in a state of poverty or marginalization.
There has always been the commitment of the Malaysian Catholic Church in the field of education, with 362 schools (including nursery, primary, middle and secondary schools) and a total of more than 150,000 enrolled students, with the idea of contributing to prepare a brighter future for the nation's new generations. (PA) (Agenzia Fides, 30/11/2022)