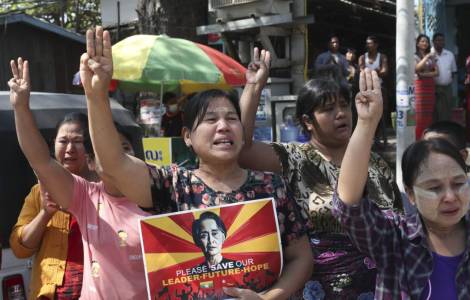 Rome (Agenzia Fides) - Burmese women are making a crucial contribution in the fight for respect for human dignity, for the restoration of freedom and democracy and in opposing the violence of the military junta in Myanmar. As stated in the webinar “Burma: Women at the forefront of democracy” held on November 24, in the People's Defense Forces (PDF) born in the nation in the aftermath of the February 2021 military coup, “there are many young women, students, workers", underlined Cecilia Brighi, general secretary of the "Italia Birmania Insieme" Association. "Many others - she continued - make non-violent opposition: women in various professional fields such as health (doctors, nurses) or public administration, refuse to work for the military junta".
Khin Ma Ma Myo, a woman who heads the trade ministry in the "National Unity Government" of Myanmar, the shadow government formed in exile by the opposition - which welcomes 8 women including the leader Aug San Suu Kyi - recalled: "Already in the last decade there was an active participation of women in political life and in civil society, and many women were involved in the strategic plan for the peace process carried out in Myanmar in the decade 2011-2021". "Today - she continued - women give their contribution to the struggle, with courage, under all aspects". "The military junta in power - she said - has no mercy and is very vindictive towards women. Those arrested are sexually abused. According to data from the Assistance Association for Political Prisoners, 307 women were killed and more than two thousand arrested in one year and means of rebellion. Women are offering their lives for the future of the country".
After the coup, Burmese women emerged as symbols of resistance to military power. Some are combatants, actively engaged in armed resistance. Others have taken leading roles in the civil disobedience movement and are dedicated to social and solidarity work. The Burmese Women's Union (BWU), founded in 1995, recently released a documentary book entitled "Women Trailblazers – Call for a New Era of Reform" which talks about the female participation against discrimination and oppression in Myanmar, since the years of the military dictatorship that began in 1962, including women of the Karenni (Kayah), Chin Karen, Mon, Shan ethnic group, but also Burmese women from Yangon and Ayeyarwady. "This book will inspire Burmese women. I think it can create opportunities for women to develop a movement together, to make them more aware of their role", said Ma Thwe Zin Toe, of the Burmese Women's Union.
Among the women "on the front line" is Sister Ann Rose Nu Tawng, a Catholic nun and nurse in the city of Myitkyina, in Kachin state. In February 2021 the nun knelt down begging the military not to kill the young protesters and the photo of that spontaneous intervention went viral around the world. Today Sister Ann Rose says she was stopped several times by the security forces, who checked her phone, and that she no longer enjoys the freedom she did a year ago. Currently, the nun works in refugee camps that house displaced people in Kachin state. There, like thousands of other women, Benedette Marang Ji Grawng, a 43-year-old Catholic woman from Kachin, mother of three children, a resident of a camp for internally displaced persons run by "Karuna", Caritas in the diocese of Myitkyina, reports: "Every day that passes, life becomes even more difficult, with increasing challenges and difficulties. But we trust in God who is close to us and answers our prayers. Every day with my husband Paul we find time to read the Bible with our two teenage children, 16 and 18. The Lord gives us the strength to carry on". (PA) (Agenzia Fides, 25/11/2022)