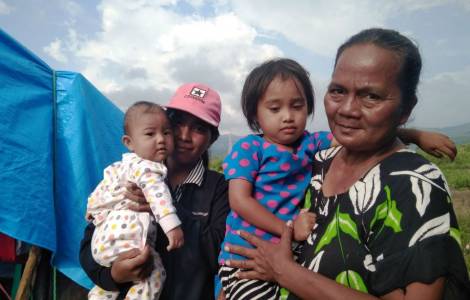 Bandung (Agenzia Fides) - In the city of Yogyakarta, a city where universities and educational institutes flourish, Catholic and Muslim students share paths of study and experiences of solidarity towards the poorest. On the island of Flores, the "Catholic heart" of Indonesia, the Camillian religious carry out food assistance programs for hundreds of families with economic difficulties.
In Indonesian Borneo, in the West Kalimantan province, a new Trappist monastery is being built, which will join three others already present in the Asian nation. In Bandung, on the island of Java, Sr. Gerardette Philips, a missionary of the Sacred Heart of Jesus, who has been in Indonesia for 22 years, as a sign of spiritual communion, shares the fast lived by Muslim believers during the month of Ramadan, sacred in Islamic tradition. In Jakarta, the organization "Sahabat Insan" ("Friendship and Humanity"), founded by Indonesian Jesuits, assists migrant workers and victims of human trafficking, restoring their dignity and freeing them from slavery.
They are all different experiences - and, alongside these, there are many others - with which in the vast Asian archipelago of 18,000 islands, characterized by some 400 native ethnic groups and 742 languages with different dialects, "Indonesian Catholics live the mission of Christ showing the face of the Catholic Church”, explains Antonius Subianto Benjamin, OSC, Bishop of Bandung, recently elected president of the Indonesian Episcopal Conference.
In a final declaration of the Assembly of Bishops of Indonesia, which has just concluded in Bandung, Msgr. Subianto reaffirms the path "to achieve a truly synodal community, where fraternity, participation and the spirit of mission are lived". In this sense, "the Indonesian Catholic Church shows unity in diversity, like the universal Church in miniature", he points out, since the bishops of the various dioceses, so different in culture and tradition, "come together in faith, hope and love".
Msgr. Antonius Subianto Benjamin wanted to highlight that the Apostolic Constitution of Pope Francis 'Praedicate Evangelium' "will help the Indonesian Catholic Church to become more present, friendly and open-hearted", to "be salt, light and leaven in society". "The Indonesian Church - he added - intends to respond to the call of Pope Francis in the Apostolic Exhortation 'Gaudete et Exultate', bringing, in the name of the Gospel, a message of consolation and joy to all Indonesians, especially those poor, the weak and the forgotten". Msgr. Subianto concluded by citing the motto formulated by Albertus Soegijapranata, the first native bishop of Indonesia: "Everyone baptized is 100% Catholic and 100% Indonesian".
The Indonesian Jesuit Father Ignatius Ismartono, who was secretary of the Indonesian Episcopal Commission for Interreligious Dialogue, comments to Agenzia Fides: "In our daily commitment, we baptized in this country with a large Islamic majority, with 87% of the Muslim population, live in peace, under the banner of respect for differences and interreligious harmony. We are present together with the most vulnerable and exploited. We seek to be a community that promotes, even in difficulties, communion between all components of society. Caring, without distinction, for our poor and suffering brothers, in whom Christ is present, is our priority. This is our synodal path". (PA) (Agenzia Fides, 23/11/2022)