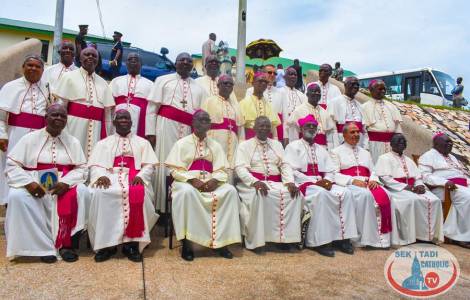 2023-01-26
Resignation and appointment of bishop of Wiawso

2022-12-02
Ghana, so far spared from jihadist attacks, questions the threat of terrorism in the region

2022-10-17
Exploitation and environmental damage: “We must fight the problem of illegal gold diggers together”

Accra (Agenzia Fides) - Corruption, economic crisis, environmental disasters linked to illegal mining activities, and potential risks of extension of jihadist activities from neighboring countries. These are the problems facing Ghana, highlighted by the local Bishops in their statement published at the end of their Plenary Assembly held in Donkokrom.
Ghana, a country considered among the most stable in West Africa, is currently plagued by "high cost of living, rising inflation, youth unemployment, corruption, rising crime, illegal mining (galamsey), weak and ineffective government institutions, abandoned and unfinished government projects, a culture of impunity, human trafficking and kidnapping", the Bishops said.
"Due to the severe economic difficulties, Ghanaians are becoming increasingly angry, frustrated and disillusioned", the Bishops say, calling for urgent action "to extinguish the anger and frustration of the population".
Anger and frustration are also fueled by the corruption of officials. "Our previous appeals on this issue appear to yield no positive results. We reiterate that corruption in every aspect of Ghanaian life is not only perceived, but widespread", the Bishops say, calling for an increased effort to identify the corrupt and recover stolen funds.
The "galamsey" phenomenon has recently been denounced by different Christian denominations (see Fides, 17/10/2022). In their message, the Bishops stress the need to target those who fund illegal mining activities: "We urge the competent agencies responsible for the protection and conservation of our natural resources to prosecute those who fund activities that cause serious damage to the country, such as illegal mining (galamsey)".
Finally, the Bishops mention the forgotten conflict of the Upper East region, on the border with Burkina Faso: "It seems that the conflict and insecurity in Bawku are gradually disappearing from the radar of the government. "The city has become a pale shadow of itself, with the education, health and social sectors being negatively affected by the exodus of teachers, nurses and businessmen from the region.
In this region of northeastern Ghana, on the border with Togo to the east and Burkina Faso to the north, the Mamprusi and Kusasi populations have been fighting each other for years over land ownership issues (see Fides, 13/4/2022). "Attention must be paid to the fate of the inhabitants who remain in the city by ensuring that a lasting solution is found to the conflict to prevent Bawku and its surroundings from becoming a possible springboard for terrorist groups operating in neighboring countries", point out the bishops. ( L.M.) (Agenzia Fides, 16/11/2022)