ASIA/BANGLADESH - Ten couples choose the sacrament of marriage: a new path in the Catholic community 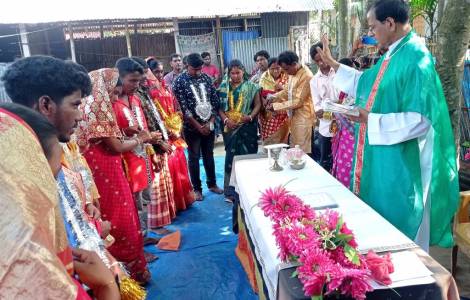 Thakurgaon (Agenzia Fides) - They have asked to receive the sacrament of marriage now, after beginning their life as a couple in previous years. This is the choice made by ten couples accompanied, spiritually and pastorally, by Father Anthony Sen, a priest of the diocese of Dinajpur, in northern Bangladesh. In the moving liturgy organized these days, the ten couples wanted to receive the grace of the sacrament of Christian marriage, as provided for by the Catholic rite. As reported by Fr. Sen to Agenzia Fides, for various reasons, difficulties, circumstances, fears, the couples cohabited and led a married life without being married, even though they were baptized persons. "They lived together and had children, they started family life without the Sacrament. This experience, for different reasons, also related to the secularization of customs, is starting to become widespread here in Bangladesh. We suggested discovering the Christian lifestyle of marriage, which is 'a life of three': spouses with God present. They listened to us, we began a path of preparation and spiritual deepening. Now they wanted to receive the gift of the Sacrament, for which we are happy", explains Fr Sen.
Some couples had lived together for 26 years, others for 20, 12 or 7 years. "As a parish priest, he got to know their situation. At the time of the synodal journey, in which the community intended to involve all the faithful, I got to know them and we began a time of pastoral meeting, precisely in the spirit of the synodal Church. We took an interest in their situation and the desire to walk together, with all the members of the Church, inspired our steps. This was a synodal experience", says Father Sen, parish priest of Ruhea parish, located in Thakurgaon.
The journey of these ten married couples is a source of inspiration: in fact, another 15 couples, who have embarked on the same journey, will receive the sacrament of marriage next January, fully integrating themselves into the community, in the spirit of the Synodal Church.
"The baptized are effective members of our community. We can all make choices that distance us from God, but it is everyone's responsibility to continue proclaiming the beauty of God's love and the special grace that is given in the Sacrament, which permeates the whole life of the family", says Father Sen, who is also the secretary of the Diocesan Justice and Peace Commission in Dinajpur.
The priest expresses his joy because the capillary pastoral work, begun with the Synod process, which includes the meeting with all the members of the community, is bearing unexpected results. The couples involved declare themselves happy and satisfied to have received the grace of the Sacrament and the blessing of God, which gives a new life and a new impetus to their marriage and family relationship".
"In the past we had thought about going to church, but we were confused and afraid, because we didn't know if they would accept us or not; one day the priest approached us, we talked and we broke the ice", explains one of the spouses to Fides. "We know that every day we will receive immense blessings from God. Now we will lead a life according to the heart of God, together with our children ", they promise.
One of the men involved, John Das, says, "My wife and our three children are happy and so am I. We realized we had lost something beautiful and great by choosing not to get married in church. I was distant and uninterested in community life. Now I have found Jesus Christ who welcomes me, loves me and forgives me. We will participate in the life and activities of the community, and we will make our contribution. We have told other couples about our choice and they have shown interest in our journey together with the Lord".
This experience shows the different and complex issues facing the Church in Bangladesh regarding the pastoral care of couples and families. In some areas of the country, the Catholic Church patiently offers the pastoral proposal of Christian marriage because traditionally tribal Catholics, according to their culture and customs, live together without the need for a sacramental marriage by the Church.
In addition, changing socio-economic scenarios affect family life in a country that has a long tradition of family and marriage unity. Social changes due to the impact of globalization and industrialization contribute to increasing problematic situations for marriage and family life, according to Shah Ehsan Habib, professor of sociology at the University of Dhaka.
Failed marriage relationships and divorces are also a widespread phenomenon in Bangladesh, reports Father Mintu L. Palma, an expert in marriage law and a member of the Commission for Family Life in the Archdiocese of Dhaka, which has published a catechetical text intended for the married life of Catholic couples.
Another issue is the presence of “mixed marriages” between Christians and Muslims: "About 10-12% of Catholics marry people of other faiths and the Church accepts it. The problems begin when one of the spouses violates the conditions of the marriage and tries to dominate the partner also with regard to faith", Father Palma points out.
The Church of Bangladesh is reflecting on the need to better accompany married couples on a spiritual and pastoral level.
"There is only one Family Counseling Center in Dhaka where couples go to discuss their problems. There should be centers of this type in all the dioceses", hopes Fr. Palma.
In Bangladesh, the Catholic Church has about 400,000 baptized out of a population of 165 million, 90% Muslim. (PA/FC) (Agenzia Fides, 14/11/2022)