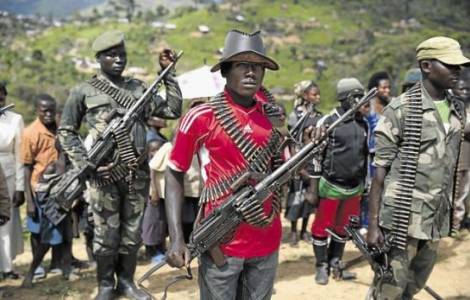 Kinshasa (Agenzia Fides) - This massacre reflects what has been happening in our diocese from October 2014 until today: the ADF attack and kill the populations, burning houses, means of transport on the roads and goods", says Fr Aurélien Kambale Rukwata, Director of the Justice and Peace Commission of the diocese of Butembo-Beni, in describing the assault on the village of Maboya which took place in the night between 19 and 20 October 2022 (see Fides, 21/10/2022). The assailants recalls Fr Rukwata, "took control of the small police station, set fire to small pharmacies, then went to the Maboya Reference Health Center, a health facility belonging to the Diocesan Office of Health Works (BDOM) and headed by the Petites Soeurs de la Presentation de Notre Dame au Temple (PSP), a diocesan congregation". "When they arrived there, they set fire to the Health Center, ransacked the pharmacy and shot Sister Marie-Sylvie Kavuke Vakatsuraki, the doctor in charge of the Center, who was preparing to operate a woman. The nun was killed and burned in the hospital fire. Six other people were killed in the assault".
"Since 2014 this situation has caused more than ten thousand deaths in the region and in our diocese to date, without a solution being found yet", said Fr Rukwata. "It is not a tribal conflict: there is no community fighting against another", the priest specifies. "This is a terrorist group called ADF (Alliance of Democratic Forces), joined with Nalu (Uganda National Liberation Army), which attacks peaceful populations to kill them. It is not a Congolese movement: it comes from Uganda and has found refuge in Congolese territory, to try to regain the power it has lost in its country". In the DRC, however, the ADF/NALU may have become an actor in a strategy aimed at removing "people from their lands with terror: people no longer have access to their fields, when their main activity is agriculture and breeding, even before trade. Fleeing these atrocities, the populations abandon their village, their fields, and come to take refuge in contexts that they consider safer: the large agglomerations, such as the cities of Oicha, Beni and Butembo".
"However - adds the priest - it should be noted that in the region there is also another dynamic: it is the conflict of the population called "Banyabwisha", which goes from the small North to the great North of our Province. These are Rwandan-speaking Hutu peoples who immigrate to the regions where these atrocities are committed". "Therefore, after an analysis, not yet definitive, we think that if there were links between Banyabwisha and the ADF, the situation of insecurity would go back to the Rwandan regime: it could be that the movement is supported by Rwanda. This hypothesis is serious and deserves an in-depth analysis, especially since Rwanda has never stopped trying to extend its economic and political expansion in the east of the Democratic Republic of Congo", says the head of Justice and Peace who adds: "The shy attitude of the international community leaves us a little skeptical and perplexed. One wonders: the events that happen here could not also be linked to the discovery of the riches of this region, in particular of oil? Could it be that people are killed to frighten the population so that they leave the area free and available for the exploitation of oil? These are questions, hypotheses that we ask ourselves". (L.M.) (Agenzia Fides, 10/11/2022)

AFRICA/NIGERIA - Six months after the massacre of the Saint-François-Xavier church in Owo, questions are being asked about who committed it