AFRICA/MADAGASCAR - In one of the poorest Countries in the world, the parish remains a refuge for all 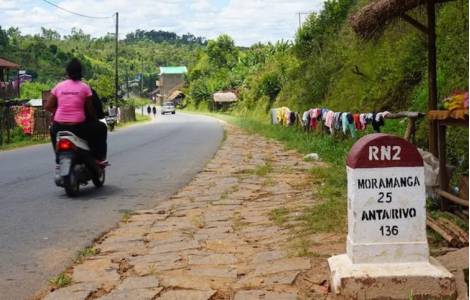 Rome (Agenzia Fides) - "In Madagascar we know that we are objectively among the poorest Countries in the world. But there is no war, the worst and most repugnant of the evils that men inflict on their fellow men. And at least for this reason, we recognize that we are lucky". The Salesian missionary, Rosario Vella, Bishop of Moramanga, Madagascar since July 2019, looks at reality with hope and Christian realism. He too recognizes that the life of the Malagasy people is conditioned by the evils of poverty and corruption, but gives thanks because the great island nation is spared the scourge of war that imposes human sacrifices in other lands, near and far, making human beings "similar to bloodthirsty beasts".
In an interview, released to Fides, the native Bishop of Sicily tells of the mission of announcing the Gospel in a country struggling with important electoral appointments and with the consequences of Covid, also mentioning the singular meeting he had with Pope Francis last October 27.
Regarding the long period of global pandemic, the Bishop highlighted the fact that, inexplicably and fortunately, the pandemic virus has not caused the devastating effects recorded in other parts of the world in the Country. "What we have not been able to avoid - adds the Bishop - are the side effects. Unfortunately, after Covid, many lost their jobs; the economy, already a subsistence economy in itself, collapsed, schools were closed for a long time. The churches always remained open, albeit with severe constraints. The consequences on people's lives have been very heavy, trade no longer existed, tourism stopped along with local transport which has resumed but with higher and unsustainable prices. Then came the war between Russia and Ukraine. Although far away, we too have suffered: all prices have skyrocketed, not just fuel, cement, construction. There were those who took advantage of this emergency, fueling tensions in view of the political elections in 2023".

In Madagascar, as in many other situations, the electoral programs presented by the various leaders never become operational. "In the 41 years of my presence in the country", Bishop Vella says, "I have heard many times of the desire for change but then nothing has ever changed. The faces of the politicians are more or less always the same, and so are the slogans. There is corruption at all levels, it is no longer known who is the victim or who is complicit in this system. The people in many ways no longer trust anyone. And in all this, many trust only the works of the Church. In Madagascar, many perceive the parish as the only refuge for everyone and everything. A place of welcome for the poor, for those who cannot study, for the sick who seek help to go to the hospital and be treated. Works of charity are part of the community's journey of faith, nourished by the sacraments and prayer". The work of proclaiming the Gospel - the Bishop remarked - is carried out with gratuitousness and dedication especially by catechists: "Already in past times, catechists reached all the people. The priest celebrates Mass, passes and then goes away, to administer the sacraments in other places. Instead the catechist shares the daily life of the people in the place where he is, he knows the families, he knows the concrete problems.
In the diocese of Moramanga, the missionary district has 125 mission stations. "In some places" the Salesian Bishop adds "the priest can only go once a year. Daily prayer in the communities is always entrusted to the catechists".

In his conversation with Fides, Bishop Vella also dwells on the "great gift" received by him and by the other Bishops of Madagascar, who came to Rome on the occasion of the Ad limina visit in audience with the Successor of Peter. After the audience, Pope Francis agreed to an "extension" of the meeting with the Council of the Union of Madagascar priests, men and women religious present in Rome. "The approach with the Pope was one of the most informal. He began in a joking way: 'You - he said - are here and you can talk about anything you want, here you can also criticize the Pope, but not outside!' We promptly replied that our desire is to know first of all what his joys and his sufferings were. He confided to us that the greatest joy is to see the faith of the people, of the mothers, of the poor. The greatest suffering, on the other hand, are the divisions at all levels that sabotage dialogue and communion. We are 22 Bishops in Madagascar. Certainly each with one’s own ideas and methods, but we are friends, we confront, we support each other. Whenever there is an opportunity for meetings, celebrations, anniversaries, we take the opportunity to be together". (AP) (Agenzia Fides, 9/11/2022)