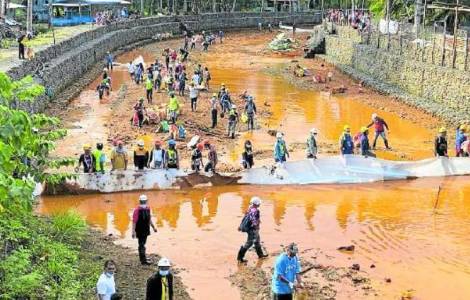 2023-02-07
In Mindanao the celebration of the Week for Interreligious Harmony: dialogue and good works, even in the face of the earthquake

2023-01-21
The community of Bataan rejects the plan to activate the nuclear power plant: life is more important than cheap electricity

2023-01-09
Catholics celebrate the feast of the "Black Nazarene", a moment of deep popular faith

Davao (Agenzia Fides) - "Every Catholic, in conscience, recalling the Encyclical Laudato Sì of Pope Francis, which promotes 'the care of the Common Home', cannot approve this operation of destruction of our territory by the logic of profit". This is how Fr. Alfe Alimbon, Director of Social Communications of the diocese of Mati, on the island of Mindanao, in the south of the Philippines, presents to Agenzia Fides the petition of the local Church demanding the cessation of mining projects in the territory. The declaration of the diocese of Mati was also disseminated and approved by the faithful, academics and students of the other dioceses of the eastern Davao province (Davao, Digos and Tagum): political representatives, members of civil society and church communities are calling on the government to declare the entire province of eastern Davao "zone free of mining exploitation".
The initiative arose after the mining giant Asiaticus Management Corporation (AMCOR) announced its plans to carry out its nickel extraction project in Pujada Bay. As reported to Fides, a large group of academics from Davao Oriental State University, that opposed the project, spread the petition of the diocese in the university and in schools. The letter calls for the protection of the Hamiguita mountain range and its vast world-renowned UNESCO World Heritage Site, threatened by being surrounded by large mining operators. Corazon Malanyaon, Governor of Davao Oriental Province, has also pointed out that "the Mount Hamiguitan Range Wildlife Sanctuary is our pride, we will not allow mining to disfigure it."
A team of researchers from the University of Davao has published the results of a study that confirms the alarming levels of contamination in Pujada Bay, with the presence of pathogenic microorganisms and contamination by 'Escherichia Coli' that far exceed the norm.
Researchers also fear that the accident that occurred in January 2022 could be repeated, when, due to the excavation of the ground, a landslide and burial of the river system destroyed a large area of land destined for rice cultivation in the city of Banaybanay.
"The province of Davao Oriental is witnessing the deterioration of its environmental conditions due to massive mining and logging operations, with deep soil erosion", reads the letter sent to Fides. At least 4,778 hectares of mining concession areas overlap the five major drainage systems and hydrographic basins that flow into Pujada Bay or the Davao Gulf. "These freshwater courses are the main water supply for the communities that live in the area".
Catholic bishops in the province have come together to officially express their support for a bill (House Bill 1124) declaring the eastern province of Davao a "mining-free zone," "to defend our common home," they say. "In the powerful name of God the Creator, we express our hope and our plea, so that we can all take care of the environment from which our existence derives", they write in a letter signed by the Archbishop of Davao, Romulo Valles; by the Bishop of Mati, Abel Apigo; by Bishop Guillermo Afable, of the diocese of Digos; and by Medil Aseo, Bishop of Tagum.
The statement cites with concern the 39 mining permits granted by the government to several companies covering some 60,000 hectares of land, to extract nickel, copper, gold and chromite. "The alleged economic benefits deriving from mining will undoubtedly not be able to compensate for the harmful costs for the environment and local communities," the Prelates point out, referring in particular to the cultural heritage of the Mandaya and Mansaka indigenous people, who see their ecosystem devastated.
For this reason, the bishops welcome Bill 1124 of the House of Representatives: the text, citing scientific studies, affirms that in eastern Davao, due to the particular conformation of the territory and the fault line, the continuation of mining is at risk of triggering earthquakes and tsunamis. In light of these studies, the bill presented to the Philippine Congress in 2019 - and which has not yet passed through Parliament - calls for all new mining operations and activities to be prohibited, allowing existing contracts to expire naturally, without being renewed or extended. (PA) (Agenzia Fides, 9/11/2022)

AMERICA/ARGENTINA - "Listening and walking together": opening of the Laudato Sì week 2022

AMERICA/CILE - Christian community in solidarity with victims of forest fires that have so far caused 26 deaths, 1,000 injured, 1,800 homeless