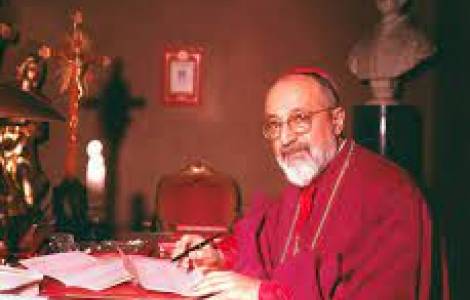 Rome (Agenzia Fides) - "The little Armenian will one day have a great mission in the Church". Thus Pope Saint Pius X addressed the twelve-year-old Ghazaros Lazarus Agagianian, meeting him during his 1907 visit to the College of Propaganda Fide. Prophetic words, recalled today by Cardinal Angelo De Donatis, Vicar General of His Holiness for the Diocese of Rome, in his speech delivered on the occasion of the solemn opening session of the diocesan phase of the cause of beatification and canonization of the Servant of God Gregory Peter XV Agagianian, Catholicos Patriarch of the Catholic Armenians and Cardinal of the Holy Roman Church, who died in Rome in 1971. The solemn session took place on the morning of Friday, October 28, in the Basilica of Saint John Lateran.
The Servant of God Agagianian, a memorable figure in the Church of the twentieth century, was also Prefect of the Congregation of Propaganda Fide from 1960 to 1970. In his speech, Cardinal De Donatis recalled the unique features of Agagianian's biography, dwelling on the multiple interconnections that unite the itinerary of this son of the Armenian people with the work of the Congregation of Propaganda Fide, in the universal horizon of the mission entrusted by Christ to his Church.
Ghazaros Lazarus Agagianian, born on September 18, 1895 in Akhaltisikhe (Georgia), left for Rome at the age of 11 to train for the priesthood. He was ordained on December 23, 1917, in the church of the Urban College in Rome. After carrying out his priestly and episcopal ministry at the service of the Armenian Catholic Church, he was elected Patriarch of Cilicia of the Armenians on November 30, 1937, at only 42 years of age. Pope Pius XII created him a cardinal in the Consistory of 1946. After the death of Pius XII - Cardinal De Donatis recalled - the name of Agagianian resonated with some insistence in the Conclave of 1958. Later, Pope John XXIII entrusted him with the office of Pro-Prefect and then Prefect of the Congregation Propaganda Fide. "In this new service to the Church - said the Cardinal Vicar - Agagianian courageously began his missionary work, becoming the first prefect to personally visit the missions of Africa, Asia and Oceania. Eager to establish direct contact with the faithful in that part of the world, he visited Pakistan, Thailand, Burma, Taiwan, Australia, the Philippines, Vietnam, Japan and India on several trips. Before each celebration, he made his 'charitable visits', meeting the sick, orphans, lepers, prisoners, all those who had material needs or lived in poverty. For the Servant of God, the suffering represented a face-to-face encounter with Christ. Cardinal Agagianian liked to say to those who assisted this suffering humanity: 'Be the hands of Christ and the feet of Christ, but above all be the heart of Christ. Be the compassion of Christ. Because this, as he himself said, means 'working tirelessly, without rest, serving others in every moment of life and giving the best of oneself every day to conquer so many nations for Christ'.
With courage and an assiduous spirit of service - Cardinal De Donatis continued - Agagianian contributed to giving a new face and a new expansion to the mission of the Church, called to be faithful to the Lord's mandate: 'Go into all the world and proclaim the Gospel to every creature'.
"At the Second Vatican Council, as moderator and president of the Commission for the Missions - Cardinal De Donatis recalled -, Agagianian understood that 'the time had come to start a more profound work, without staying on the surface, and to be like yeast placed in flour ferments the whole mass, a parable that teaches us to work from within'. He liked to repeat: 'No true believer can remain cold at the call of Christ. Who has had the grace to open his eyes to the light of God almost at the same time that he opened them to the light of the earth, cannot fail to express his gratitude to the Lord; and the best way to do it is to strive by all means, with living faith and laborious charity, to contribute to giving full glory to the Lord in the salvation of all peoples' ".
The opening session of the Cause of canonization of the Agagianian Servant of God was also attended by Rafael Bedros XXI Minassian, Cilician Catholic Patriarch of the Armenians, together with several Armenian Catholic bishops.
The Cause for the beatification of the Servant of God Agagianian will be led by Father Carlo Calloni, Procurator General of the Capuchin Friars Minor, and will have Father Nareg Naamo, Rector of the Pontifical Armenian College, as vice-postulator. (GV) (Agenzia Fides, 28/10/2022)