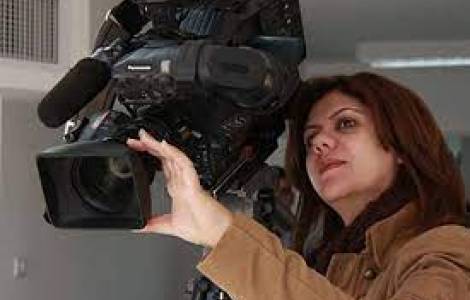 Rome (Agenzia Fides) - Death "does not put an end to human life", and it can also become a "shining witness in the Risen Christ". This was reiterated by Archimandrite Chihade Abboud, Procurator of the Greek-Melkite Catholic Church to the Holy See, in his homily of the Eucharistic Liturgy celebrated in the Roman church Santa Maria in Cosmedin to commemorate Palestinian reporter Shireen Abu Aqleh, killed on May 11 while she was documenting the Israeli army raid on the Jenin refugee camp in the West Bank. The commemoration was attended by Archbishop Pierbattista Pizzaballa, the Latin Patriarch in Jerusalem, and the members of the diplomatic corps accredited to the Holy See, as well as the journalist's family members, who met Pope Francis on the sidelines of the general audience in the morning.
In his homily, Archimandrite Chihade Abboud made several references to the professional vocation of the reporter, committed "until the last day to make known the bitter truth of the blind conflict whose end the whole world is hoping for at this moment". Each profession has its own moral rule, and this - added the Archimandrite - also applies to journalists, reporters "who come close to painful realities, collect information and, by inescapable obligation, faithfully report the substantial truth of observed facts, in loyalty and fidelity to what happened, since out of intellectual honesty they have the task of being as objective as possible", while keeping an adequate distance from their own opinions. And so Shireen also bore witness to the truth, following her calling as a reporter.
The Archimandrite's homily concluded by entrusting Shireen to the mercy of the Lord, so that she may now "contemplate the Holy Face", and invoking the Holy Spirit to bring about harmony and peace in the Holy Land, in Palestine throughout the Middle East and throughout the world".
A Greek-Melkite Christian, born in Jerusalem 51 years ago, Shireen was also an American citizen. After studying journalism at the University of Yarmouk, Jordan, she returned to the Palestinian territories and began working for several local media outlets, including Radio Voice of Palestine and Aman Satellite TV. In 1997, she began her long career at Al-Jazeera, the most famous Arabic-language satellite broadcaster, for which she had reported from East Jerusalem on Israeli political events and major events in the Palestinian Territories, such as the second intifada. (PR) (Agenzia Fides, 27/10/2022)