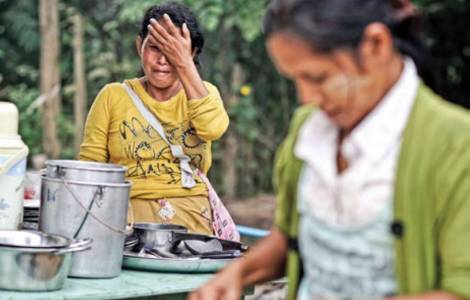 Yangon (Agenzia Fides) - The Association of Southeast Asian Nations (ASEAN) expresses its concern at the escalation of violence in the conflict in Myanmar on the eve of a special meeting of Foreign Ministers scheduled for October 27th in Jakarta (Indonesia). ASEAN calls for "an immediate cessation of fighting and the continuation of dialogue between all parties". Meanwhile, tomorrow's meeting is expected to make recommendations for the start of negotiations and a peace process.
ASEAN issued a note recalling the recent attacks on the prison in Insein (near Yangon) and clashes in Karen state, as well as the aerial bombardment of civilians in Kachin state.
According to local sources in northern Myanmar's Kachin State, an air strike by the Burmese army on the evening of October 23 on the village of Aung Bar Lay in Hpakant Municipality killed around 80 civilians who were attending a celebration of the 62nd anniversary of the founding of the "Kachin Independence Organization". This is the deadliest attack since the military junta took power in February 2021, according to locals. The Burmese army, meanwhile, described the action as a "necessary response on the "terrorist acts" of the Kachin.
A representative of the local Catholic community explains: "The Kachin had received permission in talks with the army leadership to hold a celebration in a ceasefire situation. However, the commander who made the arrangements with the Kachin was transferred.
The new commander appointed by the military junta gave the order to bomb the crowd during the celebrations". "It must be said that the Kachin guerrillas, who are predominantly Christians, respect the principles of international humanitarian law even in their struggle and treat the prisoners with dignity; the army, on the other hand, despises human dignity and acts cruelly", stresses the observer.
The United Nations Office in Myanmar, meanwhile, said that "the apparently excessive and disproportionate use of force by the security forces against unarmed civilians is unacceptable". Noeleen Heyzer, the UN Special Envoy for Myanmar, told the UN Human Rights Commission yesterday that "the political, human rights and humanitarian crisis in Myanmar is deepening and is taking a catastrophic toll on the people". Over 13.2 million people are without basic livelihoods, 1.3 million people have been displaced and the army continues to use shells, burn houses and kill civilians.
The rebellion of ethnic groups such as the Kachin, who are demanding forms of autonomy, has been going on for 60 years, but anti-government resistance has increased considerably in the last year, with the union of the new pro-democratic armed movement (organized in the Defense Forces of the People) and the armies of historical ethnic minorities. The Kachin are one of the strongest rebel ethnic groups, equipped with weapons and an army, the "Kachin Independence Army".
The Kachin, based in the border state between Myanmar and China, are a large Christian-majority population of about 1.7 million people. In the territory, the Catholic Church is organized into two dioceses, that of Banmaw (with 40,000 Catholics) and that of Myitkyina (with 100,000 faithful). There are other Christian-majority states in Myanmar, such as Shan, Kayah and Chin. (PA) (Agenzia Fides, 26/10/2022)